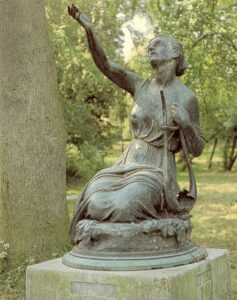 In the summer of 1998, Sappho went missing. It was not the first time she had left the plinth she had occupied for more than sixty years, having previously been abducted, albeit briefly, by persons unknown in 1994. Sappho, of course, was long the only public statue in Letchworth Garden City, having been a resident since 1907. A representation of one of the greatest and earliest of Greek poets, the story of her statue is a curious one and a story that leads us directly to an unnoticed aspect of early Garden City history: its potential attraction to members of the developing homosexual subculture of late nineteenth- and early twentieth-century Europe.

Little is known about the life of Sappho, who is supposed to have lived during the eighth century BC on the island of Lesbos in the Aegean Sea. Although she was highly regarded as a poet in the ancient world, no collection of her work has survived from antiquity and much is known only through quotations, adaptations and translations into Latin. It is unclear why this should be the case, but many high-quality literary works of Greek antiquity are lost to posterity (such as the plays of Menander); perhaps this is in part due to the low status accorded Greek literature in the post-Roman west and in part to the destruction of archives with the fall of Constantinople in 1453.

Sappho’s reputation to later centuries rests largely on the sexual ambiguity of her poetry. Many of her love poems appear to be addressed to women and her reputation in the ancient world was as someone who celebrated same-sex desire. The obsolete term sapphic and its more recent synonym lesbian to refer to women who are attracted to other women commemorates her. 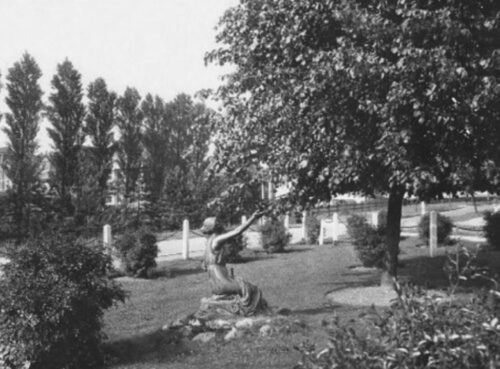 Sappho was created in 1886 by the sculptor Thomas Nelson Maclean (1845-94), a resident of Chelsea. There does not seem to be any information about his choice of subject for the work, which was originally called, intriguingly, ‘Our Sappho’. Given the poet’s well-known reputation, it is tempting to speculate that Maclean depicted a female poet of his acquaintance, perhaps even a lesbian poet. The statue was cast bronze and depicts the poet seated, her right hand raised as if declaiming.

It is not clear if the statue was intended for public exhibition or, indeed, if it was ever exhibited by Maclean. Among his effects when he died, his wife Katherine decided to part with it when she later remarried. Her sister, Isabelle Linnell (1870-1958), had moved to Letchworth Garden City soon after its foundation, having heard a lecture about the Garden City movement in London in 1903. She persuaded her sister to present the statue to the Garden City, which was done formally on 3 January 1907.

At first, the statue was set up in Lytton Avenue in 1907, where it remained for a short time before being moved to a nearby site in Broadwater Avenue. It was moved again, to the site of a public garden between Norton Way South and Pixmore Way in July 1936. Until 1935, this had been the site of the Garden City’s first swimming pool, which closed when the new lido on Norton Common was opened, allowing the old site to be converted to a garden. They were dedicated to Councillor Charles Francis Ball (1870-1933), first Chairman of Letchworth Urban District Council. The plinth was added in March 1939.

Isabelle Linnell was born in Reigate (Surrey) in 1870. As a young woman, she became involved with the committee of a campaign to protect workers in the ceramics industry from lead poisoning caused by working with lead-based glazes. She first heard of the Garden City movement through a lecture given in 1904. Together with her friend, Marguerite Borissow (1869-1946), she cycled to the developing town of Letchworth Garden City to investigate properties there. She seems to have been taken with the place and soon moved to Eastholm Green, where her friend’s family also took a house (the Borissows are recorded at Burwash, 5 Eastholm Green, in 1906 and at 10 Eastholm between 1926 and 1947, while Isabelle was at 12 Eastholm in 1946). 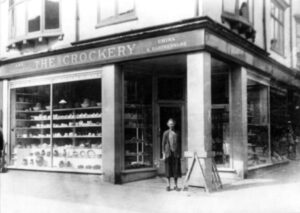 The Crockery, Isabelle Linnell’s shop on the corner of Eastcheap and Station Place; she is standing in the doorway

In the so-called pioneer years of the Garden City, she established a shop selling ceramics that did not use the hated lead glaze. It was known as The Crockery and was located at 3 Leys Avenue, opening on 29 June 1908. Her assistant at the time was George Bates, whom she described in 1956 as ‘an entertaining and helpful person’. The business appears to have been a success, as she moved into new premises on the corner of Eastcheap and Station Place within a few years. Her assistant in the new premises was a Miss Clarke. It continued in the same location from 1912 to 1934, when a retiring sale was held on 29 November.

After closing The Crockery, she seems to have diversified her interests, becoming manager of St Nicholas’s Church of England School from 1937 to 1940. By 1947, she was Director of The People’s House on Station Road. In 1953 a letter from her was published in Town and Country Planning under the heading ‘A Business Woman’s Experience’, in which she reminisced about her early days in the Garden City. A further letter to The Citizen, published on 5 October 1956, includes details about her time at The Crockery, although time seems to have confused her memory of dates although not spans of time (she remembered it closing in 1938 after ‘20 happy years’, following three years in the original premises). By this time, she was no longer living in Eastholm but had moved (albeit a short distance) to 10 Norton Way North. She died 26 June 1957 and is buried in the churchyard of St Nicholas, Norton.

Less is known of her friend Marguerite Anne Borissow, although she too became a prominent member of early Garden City society and also never married. Born to an English family of Finnish origin in Lille (France) in 1907, she was the secretary of the Christian School Union, the Garden City Co-operators Ltd and the Garden City Women’s Guild, and was a member of the Education Council. Her work with the Women’s Guild continued into the 1920s, at least. By 1930, she was Présidente of the Cercle Français at The Settlement, a position she held until 1935. Evidently an accomplished linguist, she was a tutor in French, Italian and Latin. At one time, she was also treasurer of Letchworth Girl’s Club.

We do not possess any documentation about Isabelle Linnell’s sexuality, which is hardly surprising, given the period at which she was living. However, she remained unmarried and it is unclear if her friendship with Marguerite Borissow could be described as ‘companionship’, an early twentieth-century euphemism for an emotional relationship between two women.

The case of the artist Margaret Thomas (1842-1929) is better known. She was born Margaret Cook in Croydon, but her family emigrated to Australia in 1852. After studying sculpture in Melbourne and exhibiting regularly from 1857, she returned to England in 1867. She studied art in Rome, Paris and the Royal Academy, earning a silver medal for sculpture in 1872. She became a successful portrait artist and made enough money to retire early and spend her time travelling, painting and writing. In the 1870s, she met Henrietta Pilkington (1842-1927) and the two fell instantly in love and spent the rest of their lives together. 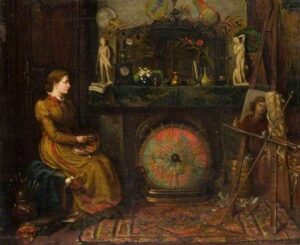 The couple enjoyed the adventure of travelling in distant lands and meeting exotic people. They left England for Brittany in 1888 and travelled on to Rome. Margaret wrote about their trip through Spain and Morocco about 1890 in A Scamper through Spain and Tangier, dedicated to ‘My dear friend, the companion of these wanderings’. They spent a journey through the Middle East in 1897 painting scenes and people. Margaret wrote Two Years in Palestine and Syria about their travels, published in 1900, in which she included pints of some of her paintings. In 1901, they travelled to Denmark and Margaret felt that it ought to be better known by English travellers.

They settled in Letchworth Garden City in 1911, living in a recently built cottage called Countryside on Croft Lane in Norton. Henrietta died two years before Margaret, who published a collection of poems called Friendship: Poems in Memoriam in her memory. The couple is buried in the churchyard of St Nicholas’s Church in Norton and Margaret had the words The sweetest soul that ever looked with human eyes. Friends for sixty years engraved under Henrietta’s name on the gravestone. Margaret is regarded as one of the foremost Australian women artists of her day.

There is little doubt from Margaret’s published record of their friendship that she and Henrietta were very much in love. They lived as a couple for more than fifty years: Margaret’s statement that they had been friends for sixty years on their shared gravestone shows her typical disregard for dates (she even managed to misquote her date of birth on several occasions). We cannot know more than this and there is little reason to speculate about their private lives.

There is an a priori likelihood that the ideals of the Garden City movement found particular resonance among the homosexual subcultures of early twentieth-century England. That it has not hitherto been remarked upon need not surprise us: early Letchworth Garden City was renowned for its ‘eccentrics’, who were gently (and sometimes not so gently) lampooned in popular publications of the day. Women’s equality was promoted from the outset, which may have provided an additional draw. Above all, with the Cleveland Street scandal and the Wilde affair still recent events, it was not a time when public displays of minority sexualities were acceptable or advisable. The Garden City pioneers were imbued with a sense that they were going to change the world, to bring about a reconciliation between town and country, worker and employer, and rich and poor in a spirit of co-operation for the common good. In this way, they have parallels with the Uranians and other gay cultural movements of the fin de siècle.

Looking at these issues does raise the question of whether we have the right to speculate about the private lives of people in the not-so-distant past. While Margaret Thomas and Henrietta Pilkington were clearly romantically tied, we know nothing about their behaviour behind closed doors, much less about how they regarded their sexuality. The problem is compounded in the case of Isabelle Linnell, about whom we have only information about her public persona. We do not even know if she remained close friends with Marguerite Borissow after moving to Letchworth Garden City.

Is curiosity about such matters voyeuristic and invading the privacy of the dead? We would have fewer qualms speculating about opposite-sex attraction and activity and most people would regard such matters as legitimate historical questions. We can make a case that worries about attributing same-sex attraction to the dead are part of a lingering sense of shame about homosexuality and bisexuality. Perhaps there is feeling that by attributing such behaviour to people, we are somehow slandering their memory, while remaining free to attribute heterosexual affairs to anyone.