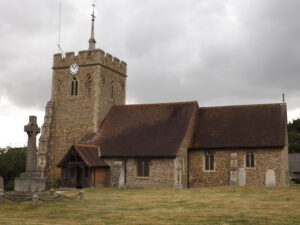 The church of St Hippolytus: a source of confusion?

There is a village to the south of Hitchin with a name that is notoriously difficult to spell. At one point, even the road signs pointing to it had different spellings: I recall my father taking my brother and me on a car ride when I was about ten years old to see how many variations we could find (I think it was three or four). Named after the dedication of the parish church to Saint Hippolytus (one of only two in England), we probably ought to call the village St Hippolytus’s. No-one has tried that since the seventeenth century and the English Place-Name Society preferred St Ippollitts when it published its survey of Hertfordshire placenames in the 1930s, so that’s what I’ll stick with.

The early history of the parish – which includes Gosmore, Maydencroft and Almshoe to make matters more complicated – is obscure, as it’s not mentioned in documents until the thirteenth century. The church is nearly two centuries older than the first mention of the village it serves! What is going on?

Here’s my version of the early history of St Ippollitts, to about 1400. I’m not promising that this is a definitive answer, but it’s a proposal.

One Response to St Ippollitts, St Ipolyts, St Ippolyts or what, exactly?