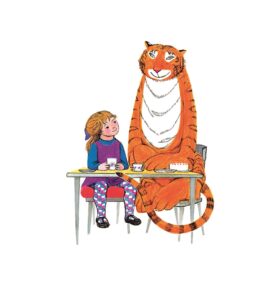 The Tiger Who Came to Tea

An exhibition that explored the life and celebrate the work of one of Britain’s best known author–illustrators for children, Judith Kerr. It focused on the much-loved classic The Tiger Who Came to Tea and was created by Seven Stories – the National Centre for Children’s Books. It features high quality copies of Judith Kerr’s original illustrations from the Seven Stories collection and brought this delightful book to life for a new generation of family audiences. Judith Kerr’s first picture book began as a bedtime story for her own children and was first published in 1968. It soon became a classic and by the time it celebrated its 40th anniversary in 2008, it had been translated into 11 languages and sold over five million copies.

A play version of Sophie’s kitchen featuring a friendly 5-foot tiger offered children the opportunity to experience the story firsthand. Tiger themed craft activities, a reading corner and story sessions ran over the summer holidays, and there were special Tiger who Came to Tea themed afternoon teas, with stripy cakes and sandwiches.

The exhibition detailed Judith’s childhood and her experiences of having to escape Germany as Hitler came to power, how it felt to be a refugee in Switzerland, then France before finally settling in London in 1936.Book your tickets here.

Some Observations ‘About Now’ by Adrian Marden 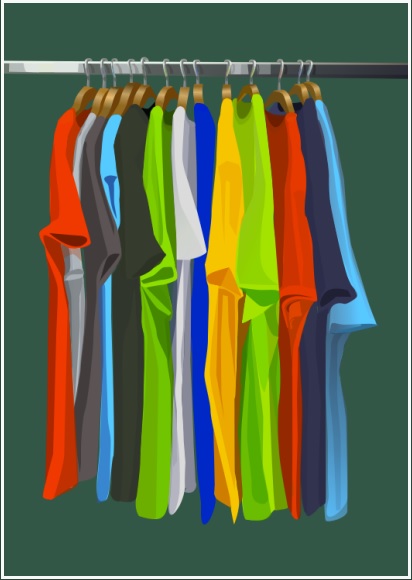 The show celebrates the forms and detailing of everyday artefacts. However, each object is selected because it has a story to tell and it is the combination of the contemporary images and their, often unexpected, tales that make up this display.

When working in the design industry I became aware of the high levels of thought and ingenuity that go into even the simplest object. The work highlights commonplace artifacts, cataloguing what Jasper Johns called ‘things looked at but rarely seen’. Some of the accompanying texts may be amusing, some illuminating and others concerning but all offer key statistics and salient comments on many questions about contemporary living.

The prints are made using a digital drawing package which is part of the Pages software on a Mac laptop. Each image is constructed by observing and recording the subject and, at first sight, the work may appear photographic. However on closer inspection it can be seen that each rendering is created from a multiplicity of drawn shapes that are carefully coloured and positioned to give the illusion of a 3D form. 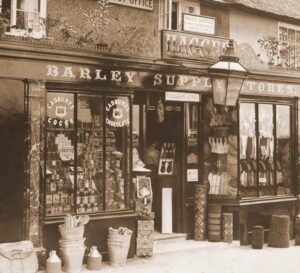 3 December 2020 to 27 June 2021
The Museum Service has an extensive collection of historic photographs covering all North Hertfordshire, which was home to some pioneering photographers. We chose a sample to give visitors a taste of local life more than a hundred years ago. See if you can spot familiar places and work out how much has changed as well as what has remained from Victorian and Edwardian times.
You can view the photographs that were on display here.

Here is the gallery of images requested during January 2021. 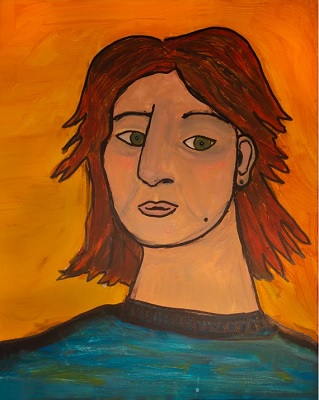 13 October 2020 to 27 June 2021
Beccy creates a colourful world of characters who come to life on their canvases. They form themselves often just from one line, a dollop of colour and whatever emotion is fizzing through her thoughts at the time. She likes to play around with the creative process, closing her eyes, dipping fingers in the paint and seeing who emerges. There’s often an evocative face staring back from the canvas, asking for further evolution.

‘If you are looking for something truly original, sometimes wacky, often thought-provoking and always colourful, then Beccy’s artwork is for you. It will bring you joy for years to come.’ Jennie Bond

This exhibition was in The Arches, part of the Terrace Gallery. 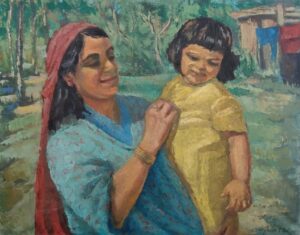 Sylvia Molloy was an adventurous and well-known artist from England, who married in Burma (now Myanmar), escaped the Japanese invasion to live in South Africa before returning to England. After graduating from Durham with a degree in Art and English, she began teaching in St Asaph and met her husband-to-be in Cambridge. She joined him in Burma, where he was an Assistant District Officer, whose job took the newlyweds through the Shan States. Sylvia made sketches and paintings of local people. When the Japanese invaded in 1942, she left for India on the last RAF flight from the country and her husband joined her after an arduous trek. Their first son was born during the year they spent in India and their second when they came to the UK. After the war, they returned to newly-independent Burma only to flee again when terrorists assassinated the entire cabinet. Catching a ship to Durban they settled in Johannesburg, where they remained for sixteen years. Disgusted with Apartheid, the couple left South Africa and came to Letchworth Garden City in 1963. She exhibited at The Royal Academy, the Paris Salon, the Royal Australian Society of Arts as well as other galleries. 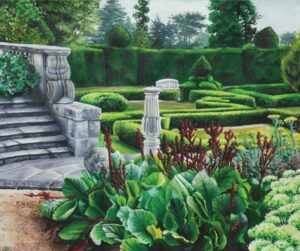 Acrylic painting has become a lifetime’s passion for Gilli. This is her fifth solo show and the first since 2005. She has exhibited at the former museum in 2003 and returns to this new museum with an eclectic mix of highly detailed and expressive abstract and realism acrylics.
She has been exploring and observing what the word “escape” really means. Whether it be the companionship of loved ones, meditation or a walk in long grass! Escapism is good for the soul, mindfulness, emotions and for physical well-being. Something we mustn’t take for granted in these testing times.
Four of the paintings on display today were created during lockdown.
Gilli is currently an active member of the Hitchin Art Hub, which showcases local artists in pop up art exhibitions, art market and charity fundraisers for the Hitchin community. 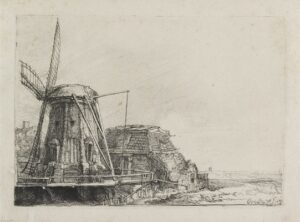 18 January – 2 August 2020
To launch Hertfordshire’s Year of Culture, we hosted an exhibition from the Ashmolean Museum of prints by Rembrandt van Rĳn, one of the greatest artists of all time. It consists of prints from their world-class collection of prints made by the artist, spanning much of his career from Leiden in the early 1630s to those made in Amsterdam in the 1650s. Many of the prints were given to the University of Oxford in 1855 by the collector Chambers Hall.
Born in Leiden in The Netherlands in 1606, Rembrandt moved to Amsterdam about 1631, where he became the greatest Dutch artist of all time. His popularity derives from his exceptional observational skills. The works include not only revealing self-portraits but also sensitive landscapes and tender religious subjects shown as everyday scenes. 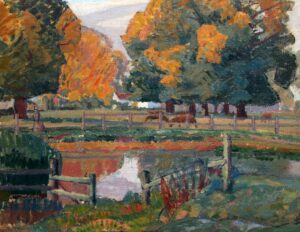 5 October 2019 – 5 January 2020
This exhibition, held in the main exhibition gallery, included works from the former Hitchin and Letchworth Museums. This was the first time that we were able to select works from the two collections to show as a single exhibition. 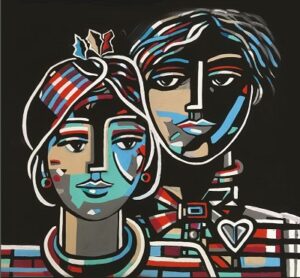 21 September – 24 November 2019 in The Arches
Krysia is a professional artist living in Bygrave, with a studio in Hitchin, who specialises in striking colourful portraits.
Krysia’s paintings are original, bursting with a vivid imagination but balanced by the elegance of the line, bold colours and imbued with a certain poetic, Slavonic wistfulness, especially in the eyes, which makes her work very distinctive. 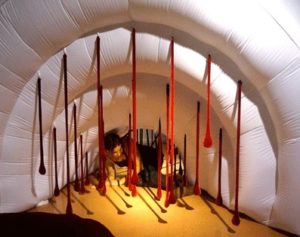 This sensory exhibition was designed specifically for family audiencesby Spacecadets Air Design.
Spacecadets have taken inspiration from human biology and the artworks are inspired by cells and organisms inside our bodies. Visitors could explore, listen to and touch a series of giant breathing tunnels and caves suggestive of body organs, blood cells and bone. 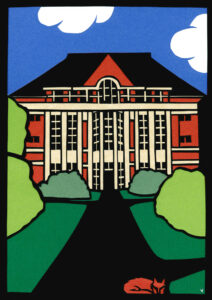 Vanessa Stone is a cut paper and collage artist who uses bold colours and pared down compositions that are primarily inspired by English countryside and townscapes. All Vanessa’s collages are cut by hand using a scalpel. She cuts shapes from the surface of paper, letting an image rise to the surface. This exhibition of nine collages is a personal response to places that resonate strongly with her experience of living in Letchworth for many years. They are pieces which evoke memories of childhood play, family walks and views of places on the way home from the school run – as well as works which celebrate the amazing architecture of the area. 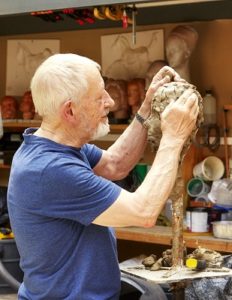 This exhibition was an in-depth look at the work of John W Mills, a sculptor who has lived and worked in Hinxworth for many years. He is best known for his national commissions including ‘The Women of World War II’ monument in Whitehall, London and ‘The National Firefighters Memorial ‘at St Paul’s Cathedral, London. He has also designed a number of Royal Mint coins including the D-Day 50 pence coin. Sculptures made from bronze, resin, terracotta and plaster will be on display and will include a model for The Women of World War II; Tommy, Charlie Chaplin and a self-portrait.

Born in 1933, John W Mills has dedicated his life to sculpture and design work with a career spanning over 60 years. He studied at Hammersmith School of Art and the Royal College of Art, eventually teaching art across the UK and the USA. His work has won awards from the Royal Society of British Sculptors and the Royal Society of Arts and has been exhibited in the UK, USA, Canada and Australia.