Royston Cave and the Templars? 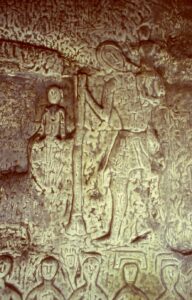 The most famous archaeological feature in Royston is almost certainly medieval, although earlier origins have also been proposed. Royston Cave, likely to have been decorated between the fourteenth and sixteenth centuries, is said to be a site unique in Britain and probably in the world. It consists of an artificial subterranean chamber carved from the chalk bedrock and decorated with engraved figures and unusual symbols of late medieval style. The cave was discovered by accident in 1742 and the only finds recorded from its initial excavation included a human skull, some decayed bones, a small slipware drinking cup and a piece of plain brass. Scrapings of the wall have been analysed and found to contain traces of pigment on the carvings, confirming early reports that they were once coloured.

Numerous incompatible suggestions have been made about the use of the cave. Soon after its discovery, William Stukeley suggested that the carvings were made by one Lady Roisia, whom he supposed to be the eponym of the town and who he believed used the Cave as her chapel, where she was subsequently interred. Arguing with Stukeley, Charles Parkin proposed that the carvings were of Anglo-Saxon date and that it had been used as a burial place for Saxon royalty. Joseph Beldam, the local antiquary, believed that it was used during the Crusades as Christian oratory, although he suggested that it was originally a Roman burial shaft. Sylvia Beamon has suggested that the Cave was used for devotions by the Knights Templar and may have been constructed in imitation of the Holy Sepulchre in Jerusalem; this is currently the most popular view of its origins. Some have seen the symbols as pagan rather than Christian, or, at least, as depicting Manichaean heretical views, a viewpoint that has found resonance with modern, erroneous, views about the beliefs of the Knights Templar. More recently, Joanna Mattingly has proposed that the carvings were made by prisoners in the late fifteenth and early sixteenth centuries.

Read more in Royston Cave and the Templars?.