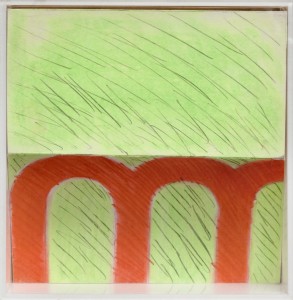 Although the old museums are closed, and we’re waiting for the wonderful new North Herts. Museum to open, where appropriate we still acquire new works for the collection. Last year we were extremely fortunate to gain grant aid from three generous funders (the Art Fund, the Arts Council/V & A Purchase Fund, and the Hertfordshire Heritage Fund) to purchase M4, a work by internationally-renowned artist Richard Smith. 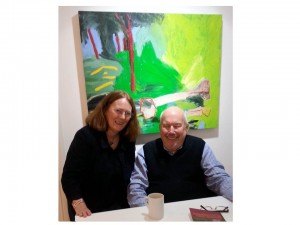 With Richard Smith at his 2014 exhibition

Richard Smith has long been recognised as one of the most important painters of his generation, with work in major collections throughout the world, including over 90 paintings and drawings in the Tate. He was born in Letchworth in 1931, at school there and later at Hitchin Boys’ School. After art school in Luton and St Albans, Smith attended the Royal College of Art, winning a Harkness Fellowship to New York in 1959. Here he produced work that was abstract and concerned with the formal use of space and colour, yet, like the work of contemporary Pop Artists, referenced American advertising and culture. He began to use shaped canvases, and then kite-like constructions, using canvas with string and tubing. In 1971 there was an exhibition of Smith’s work at Letchworth Museum. He returned to live permanently in New York in 1978.

A couple of years ago I discovered that Smith was born locally, so should really be represented in the museum collection in some way. I rang his London dealer the Flowers Gallery to ask if they had a photograph of him we could use, as I didn’t think we’d be able to afford one of his paintings. In a stroke of pure good fortune, they told me that he was coming over for a retrospective exhibition in a couple of weeks, and asked if I’d like to meet him at the exhibition opening. I was thrilled to meet him at the show, and realised that with a package of grant aid, we might be able to afford a small painting. The piece I chose M4, of 1968, is a green and red coloured drawing in a Perspex box; the lower half curves backwards, giving it a sculptural quality. It took a while to put together the grant applications, but we were successful, and the museum is extremely grateful to the three funders.

The work is on view in Letchworth at the moment, lent to the first exhibition in the new Broadway Gallery, Leys Avenue, Letchworth (previously Letchworth Art Centre). The curator, Laura Dennis, will be talking about Richard Smith on Monday evening, 4 April, for the Letchworth Garden City Society. The talk starts at 7.30pm in the Broadway Gallery, and non-members are welcome; admission is free. The exhibition , Richard Smith, Reunion, runs until 5  June, and the gallery is open Wednesday to Sunday.