Both Letchworth and Hitchin Museums collected archaeological material from the moment they were founded. Staff from Letchworth Museum especially were involved in active fieldwork, including excavations, which generated a great many finds. 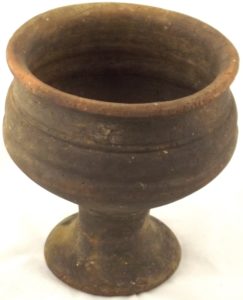 The largest part of the archaeological collection consists of material from excavations at the Iron Age and Roman town of Baldock, much of it from campaigns conducted by Letchworth Museum from 1925 to 1932 and 1978 to 1994. We also hold the archive from Ian Stead’s major excavations there between 1968 and 1972. The human remains from the many cemeteries investigated are especially important for research into the demography and health of a Romano-British population.

There is also a good collection of prehistoric material, ranging from an internationally significant group of Lower Palaeolithic handaxes, mostly from Hitchin, through Neolithic finds from Norton henge and Bronze Age metalwork, including a massive hoard of scrap metal from Nuthampstead, to important Iron Age material from Blackhorse Road in Letchworth Garden City. 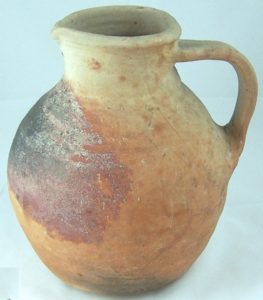 Roman material includes not only the finds from Baldock but also from numerous small sites across the district, including from villas, farmsteads and villages; the contents of the grave of a wealthy individual buried at Kelshall shortly after AD 200 are a special highlight of the collection. There is an important collection of early medieval skeletons from The Fox in Pirton, while the archive of Guy Beresford’s 1970s excavations at Caldecote ranges from early medieval to post-medieval. Waste pottery from at least two medieval kilns in Hitchin dates from the mid twelfth to early fourteenth centuries and is one of the largest groups of such material from the county.

North Hertfordshire Museum is also the collecting museum for archaeological archives that contracting units generate as part of the planning process. This is a constantly growing area of the collection and the archives of unpublished excavations are an especially valuable resource for researchers and local historians.

Contact us if you would like access to our archive or part of the collection for you research. You can browse our online database of archaeological material here.