Inside a prehistoric mind

How can we tell how people in the past thought? In literate societies such as ours, we can read the thoughts of other people, written down as words in diaries for instance, but for most of human history, people have not been able to read or write. Indeed, if you go back more than five thousand years, writing did not exist. Trying to work out how people thought in remote prehistory may seem an impossible task but very occasionally, clues survive that can help us. 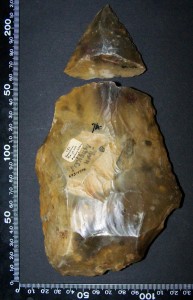 One example of just such a clue comes in the shape of a handaxe from Hitchin. Handaxes were not axes for chopping wood but were multi-purpose tools, used for well over 1½ million years in Africa, Europe and much of Asia. Hitchin is an important find-spot of these tools, many of which were discovered while digging for the clay that was important to the town’s brick-making industry in the late nineteenth century. Local geologists and antiquaries became intrigued by the discoveries and began to collect them. One of the most prominent of these was William Ransom (1826-1914), who amassed a considerable collection of stone tools from sites around the town (principally The Folly pit on Stevenage Road, Benslow, Highbury and Bearton Green pit). As well as the stone tools, he was interested in animal bones and collected specimens of bear, straight-tusked elephant and rhinoceros, which show that the handaxes were dropped in a warm, fertile landscape. These tell us when the layers containing them formed: during the middle of a warm period during the Pleistocene known as the Hoxnian Interglacial, around 424,000 to 374,000 years ago.

This means that the Hitchin artefacts are extremely ancient, dating from about 400,000 years ago. This was a time when Europe was inhabited by people of a different species from us, Homo heidelbergensis, probably the ancestor of the Neanderthals but not of ourselves. So, you would think that their behaviour would be very different. One of the handaxes from Highbury in Hitchin suggests otherwise.

Papel label on the back of the handaxe

This is a broken handaxe; according to a paper label stuck to it, “The point found 4 days before the larger point about 4 ft apart and 6 ft deep. Nr Hitchin 29.XI.1880”. In other words, the two parts of the broken tool were not found together. Why might this have happened? We know from studies of handaxes that they were constantly reworked to sharpen blunted edges and to repair broken tips. This has not happened with this particular handaxe: when the tip snapped off, both parts were discarded without reworking. 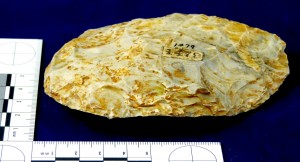 A twisted ovate handaxe; this type shows evidence for considerable repair and reworking

This looks very like deliberate throwing away. In fact, it looks almost as if one of the broken elements (it is impossible to say which) was thrown a short distance in temper and the user was too angry to rework the tool into something useful. This looks just like modern human behaviour: who hasn’t been so frustrated when something breaks that they throw it down in disgust? Yet we are dealing with a completely different species from ourselves. What this seems to tell me is that at least some extinct hominids behaved like us, had similar emotions and were not the lumbering brutes of popular culture. Just because they lacked the complex technologies of modern society does not mean that they were “primitive” or “savages”: different, yes, but just like us in so many ways.