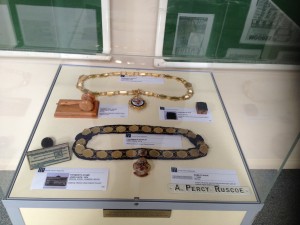 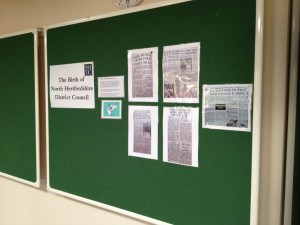 Last week saw the 40th anniversary of North Herts. District Council. Before they left, our two much-missed interns prepared information for a display about the birth of NHDC, which Sian and I put up in the Council Offices for the anniversary Council meeting on Thursday evening. As well as information about the winding up of the previous councils (Hitchin Urban, Hitchin Rural, Letchworth, Baldock and Royston Urban District Councils) Emily and Vicki had copied old adverts from 1974, when a Council salary started at just over £600pa, and you could buy a nice house for £13,000. The museum has a copy of the menu for the last meal of Hitchin UDC, held at the Angel’s Reply in Hitchin, where the pudding was Pineapple Surprise, followed by Cona coffee. The top photo shows some of the local government material normally held in store, the lower photo shows a small selection of the images we displayed.