Walkern may not be part of North Hertfordshire (although Box Wood in the north-western corner of the modern parish was a manor at the time of Domesday Book, part of which now lies in the North Hertfordshire parish of Weston), but I have been helping out its Local History Society for three years. My role has been to advise their project of test-pitting across the village, which is currently on hold because of the CoViD-19 outbreak. Last year, I gave the Society a talk summarising what had been discovered during three seasons of test-pitting across the village; the document you can download at the end is an expanded version of that talk.

Walkern is a parish in Broadwater Hundred (one of the ancient divisions of Hertfordshire), first recorded as Walchra in Domesday Book. The name is Old English wealc-ærn, ‘a fulling mill’; these were sometimes known as ‘walk mills’ (wealc-ærn means ‘walk-house’) and were water-mills where cloth was thickened by being pounded. Intriguingly, Domesday Book does not mention a mill, but the mills it records elsewhere were usually flour-mills, as these were a source of revenue for the lord of the manor. The current water-mill at the south end of the village, where the main road crosses the River Beane, was built in 1828 but one is known to have existed early in the twelfth century when its revenue was granted to the parish church. 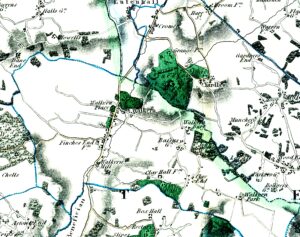 Bryant’s map of the village, published in 1822

Writing in 1700, Sir Henry Chauncy wrongly, but picturesquely, gave the etymology as being ‘from the moist and ousing Springs which reinforce the River of Bean or Benefician, with a Stream that driveth a Mill out at the South End of the Town; for Wall in the Saxon Language signifies a most or watry Place; and ’tis recorded in the time of William the Conqueror under the Title of Terra Tainorum Regis.’

The church had pre-Norman origins, and it may have been the minster serving the territory of the Beningas, a people who gave their name to Benington. It became a barony under Henry I, with a castle. There was a medieval deer park of over 300 acres. The bad weather and cattle murrain of 1341 led to hardship, with large areas of the open field left unploughed.

Archaeological data is an important but often misunderstood element in local history. To many people, it is a collection of pretty finds; to others, it is an impenetrable mass of data about prehistoric times. Needless to say, both views are completely wrong. Archaeologists study the physical remains of the past, be they artefacts (including the pretty finds, if any exist), buildings, excavated pits and so on. They may be hundreds of thousands of years old or they may be only thirty years old: age is not important. The basic aim is to put all this data into a chronological sequence and to investigate what it can tell us about the past.

When looking at the archaeology of a single place, the best place to start is to see what is contained in the Historic Environment Record (or HER: they used to be known as Sites and Monuments Records or SMRs). This is a database maintained by the County Council’s Historic Environment Unit, which is used to help planners make decisions about the suitability of development applications. 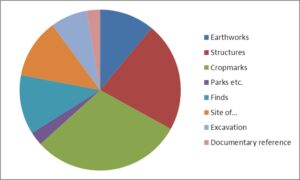 The Hertfordshire HER for Walkern contained 109 entries when the test-pit project was launched in 2017. Over half of the information about the village came from cropmarks (33) and surviving buildings (24). Only 13 finds had been recorded, while only eight archaeological features had been excavated or recognised in foundation trenches.

This is not a lot of data overall. There is almost nothing about prehistory (a possible prehistoric ditch has been recorded, while several cropmarks may show the ditches of ploughed-out burial mounds) and even the Roman period can boast just over a dozen entries when it is often one of the best represented periods. So, is it possible to say anything about the development of Walkern through time? With the results of test pits carried out across the village, we can begin to build the outline of a story.

Read about the results of the test pitting here.