On Sunday morning, I led a walk with Angela Forster (from Hertfordshire County Council’s Countryside Management Service) around the Weston Hills, south of Baldock. Taking in parts of Baldock, Clothall and Weston, it goes through a variety of landscapes that help tell the story of the local geology, ecology and archaeology. It is one of the Countryside Management Service’s regular Walks and More events that aim to get people out into the county’s often under-appreciated rural areas both to learn about local wildlife and heritage and to help maintain an active lifestyle. 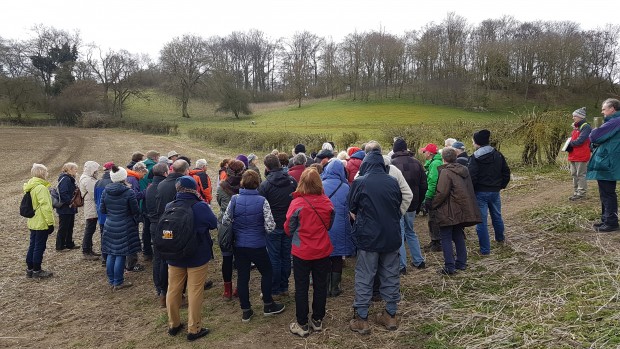 Learning about geology in a dry valley near Old Wellbury Farm

The walk began in Baldock (in the car park at the rear of Tesco) and we went along South Road and Limekiln Lane and on to the footpath leading to the footbridge over the A505 Baldock Bypass. Here was a good place to stop and for me to tell people about the archaeological importance of Baldock. The line of the road south-east from the ancient town crosses the fields between this point and the A507, eventually falling into line with the footpath close to Old Wellbury Farm before climbing the hill to Clothall. Baldock is really two separate towns: an ancient settlement that was abandoned by AD 600 and the Knights Tempar’s ‘new town’ of the 1140s. The earlier settlement has strong claims to be Britain’s first town, developing in the fifty years or so before Julius Caesar’s invasions in 55 and 54 BC.

From the footbridge over the A505, we walked to Old Welbury Farm and turned right into a dry valley, along the long-distance Hertfordshire Way. This is a good place to discuss the geology of the area, with its underlying chalk bedrock formed 90 million years ago beneath a sub-tropical sea. A period of uplift pushed the tectonic plate above sea level until it sank again, to be covered in a layer of clay when it was at the bottom of a lagoon. Further uplift pushed it above sea-level once again and during the Anglian Glaciation, 475,000 to 424,000 years ago, North Hertfordshire was covered by an ice sheet. As the climate grew warmer, the meltwater wore valleys into the chalk bedrock that are today dry, although they look as if they should have streams in them. The glaciers also fractured the chalk, mixing it with surviving patches of clay, breaking flint nodules and depositing acidic sands in pipes and cracks in the rock. This makes for a very complex geology that is the bane of gardeners and archaeologists alike.

At the top of the hill, we turned right (north-west) off the Hertfordshire Way to cross the large field on a trackway leading towards the triangular woodland. Off to the right is a large crater that often has a pond in it, thanks to the underlying clay that impedes drainage. This is just one of several visible on the top of the hill, which were formed in August 1944 when two American B17 bombers from Parham airfield, near Framlingham, collided. They were on their way to Nazi shipyards at Brest in Brittany as part of the Allied invasion of Europe when the pilots realised that collision was inevitable so, to minimise the danger, they shed their bomb load. Part of the wreckage fell at Friend’s Green in Weston, killing a child and a woman evacuee. 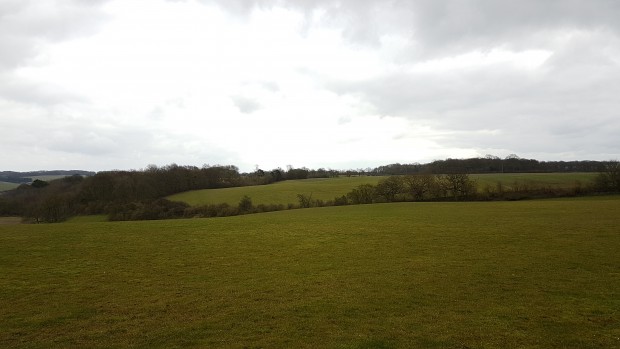 The henge at Weston Hills, seen as a slight hump in the centre of the field in the distance

Beyond the crater, it is just possible to make out a slight rise in the field behind the wire fence. This is better seen from the far end of the triangular wood at the end of the field, where its position at one side of the dry valley we had entered earlier can be appreciated. It is not an obvious monument in the landscape, but if you know where to look, it is visible as a slight earthwork. From here, the ditch that helped to define it is visible. Henges are believed to have been ritual monuments of the Late Neolithic and early Bronze Age (about 3100-1800 BC), but they are not the same things as stone circles, so don’t think of Stonehenge. Norton Community Archaeology Group excavated a similar monument in Letchworth Garden City between 2010 and 2013 and it is possible that this one in the Weston Hills was built as a replacement when the Norton Henge went out of use around 2200 BC.

From here, we crossed another field with more bomb craters either side, to the footbridge across the A505 Baldock bypass. Here, the edges of the cutting were seeded with chalk downland plants, providing an important ecological zone. This was one of the reasons for keeping the tunnel so short, the other being cost. The tunnel, though, reduces the visual impact of the cutting when seen from the east, helping to hide it in the landscape. At the top of the cutting, it is possible to see orange glacial sands filling glacial pipes and cracks in the chalk bedrock, visual evidence for the impact of the Pleistocene glaciation of this area. 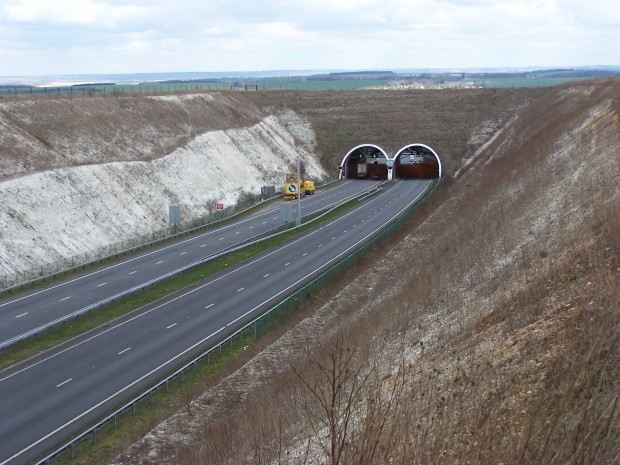 The Weston Hills tunnel in 2013

From here, we descended into the Weston Hills nature reserve, designated as such in July 2012. It is actively managed by the Countryside Management Service and the Friends of Baldock Green Spaces, who keep the site tidy and help maintain the ecologically rich chalk downland landscape around Gibbet Hill. Here, a steep-sided spur is kept free from trees and scrub by grazing, as it would have been in the Middle Ages. It is home to an amazing diversity of wildlife, including the common spotted orchid and field scabious. The name Gibbet Hill is first recorded in the seventeenth century and presumably refers to a place of execution: a gibbet on top of the hill would have been a prominent and stark reminder of the potential fate of criminals at a time before the hills were planted with trees in the 1800s.

The other hillsides, which are largely hidden by woodland and scrub, have a number of ancient quarry scars, particularly to the east of Gibbet Hill. Although the name of Limekiln Lane shows why the chalk was being quarried in recent centuries, we also know that it was quarried in Roman times thanks to chemical analyses of mortar and plaster from buildings in the ancient town. More surprisingly, white tesserae (cubes of stone used in mosaic floors) from a villa in Leicestershire were also found to be from the Weston Hills. This suggests that the quarry owners were able to market their products over a wider area than just the local town. It also means that some of the quarry scars visible in the hillside are likely to be of Roman date; some of the more bowl-shaped scars could well be from then. There are also terraces on the hillside that lead to and from the quarries and many of these are probably also of Roman origin. 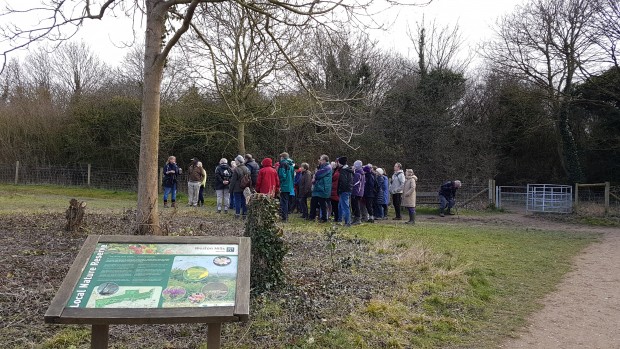 Learning about the management of the Nature Reserve

At the north-east end of the reserve, back towards Limekiln Lane, management of the site is done by bringing longhorn cattle onto the site. These are docile and are not disturbed by dogs walked on the hills, unlike the sheep that graze Gibbet Hill (dogs should always be kept on a lead around sheep). By grazing in summer and autumn, they keep the development of scrub to a minimum. Thinning the woodland by hand also helps to allow some trees to grow taller while bringing sunlight down to ground level encourages the growth of woodland plants with the butterflies that feed on them. Birdlife is also abundant, with buzzards and tawny owls the main predators around the hills. Red kites are also becoming common around the Weston Hills and North Hertfordshire more generally, a real success for the conservation movement.

The Weston Hills walk is about 5.5 km (3.5 miles) and takes around two and a half hours at a gentle strolling pace. It can be muddy in places, but this is a reminder of the area’s complex geological history, and although some of the climbs are steep, it is not a difficult walk.

This year’s summer excavation by the Norton Community Archaeology Group is coming to an end, so today the museum team went to see what they have found. 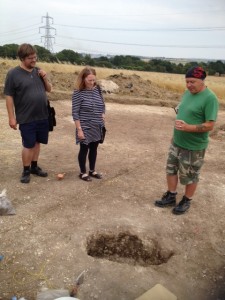 It is a very interesting site, which Keith really brings to life. I would encourage those of you who are able to go along to the Open Day tomorrow and have a look for yourself. If you can’t visit, Keith and other members of  the Norton Group have been keeping a blog detailing the progress each day, and posting pictures of some of the finds.

Visit to the National Football Museum

On 27 March, eight of us plus David Sims went by minibus to visit the National Football Museum in Manchester, all funded by our football grant. 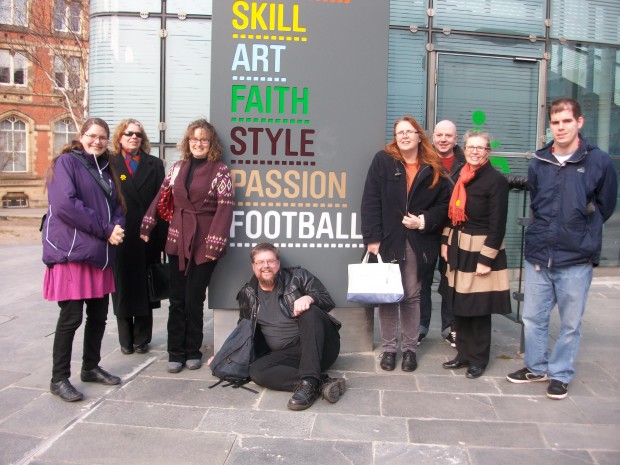 The team outside the Football Museum

The museum was originally based in Preston, and opened in its glossy new town centre home last year. First of all we were shown round by Laura, a lovely enthusiastic member of their front-of-house team. After a pie and mash lunch, Laura plus their Education Officer and Sally, the Curator, spent most of the afternoon with us, explaining how they had had to move all the objects from Preston, how they thought of the different themes for the new displays, and gave useful tips on working with museum designers.

It was great to see the enthusiasm of all the staff for their museum, even those who hadn’t really known much about football before working there. We hope to continue the relationship, lending them items from our Football Collection and taking back some loaned items when the new museum opens.