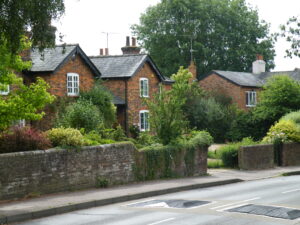 The parish of Lilley lies on the western edge of North Hertfordshire, mostly north of the A505. Its northern boundary follows the early medieval line of the Icknield Way, and it abuts Bedfordshire to the west. Part of the parish once included Mangrove Green, now in Offley. Three areas now in Lilley, one stretching from the eastern edge of Ward’s Wood in the west to Kingshill Plantation in the east, the second from west of Lilleypark Wood to the boundary wall of Putteridge Bury and a third to the east of Dogkennel Farm, were formerly part of Offley. The longer version of this post, linked below, explores how this complex arrangement came into being.

Although the first record of Lilley is in 1086, when Domesday Book was compiled, the community has a much longer history. It is possible that the settlement initially lay in the northern part of the parish and developed from the estate of an undiscovered Roman villa. Its move south to East Street and West Street perhaps happened when the parish church was founded, before the Norman Conquest. Archaeological remains take the story back to earlier periods when there were farmsteads and valleys across the landscape. There may even have been a henge (an oval area enclosed by a chalk bank) on a hillside overlooking Mazebeard Spring.

Read more about the history and archaeology of Lilley here.

A new leaflet on ancient Baldock

Published Thursday 7 May 2020 | By Keith Fitzpatrick-Matthews 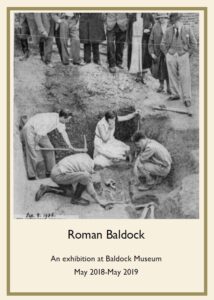 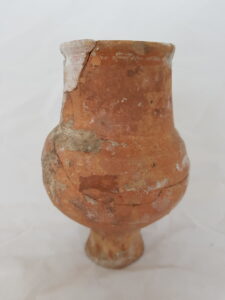 A beaker, probably hand made at Much Hadham, typical of pots made after 400

Two years ago, I put together a small exhibition for Baldock Museum on Roman Baldock. It meant not only choosing a selection of interesting objects not on display in North Hertfordshire Museum but also writing the text for panels on the wall. I wrote enough to put into a leaflet, which I intended to make available at the Museum. As well as telling the story of the ancient town and its people, it contained a brief catalogue of the artefacts in the cases. It so happened that the exhibition coincided with a major programme of work on Baldock Town Hall, which meant that the Museum was closed for a long stretch during the year it was supposed to be on open.

Now that North Hertfordshire Museum is also temporarily closed, it seems a good idea to make the leaflet available for people to read. It explains how the ancient settlement has been revealed over the past hundred years. Beginning with remote prehistory, it looks at why the settlement came to grow up in the hollow between the hills of North Hertfordshire. The main part of the leaflet talks about the development and decline of the Roman town, looking especially at its people and their beliefs. The catalogue gives further insights into the history of Baldock. There are 22 A5 pages in all.

The Woman and Three Babies, the sad story of a real person 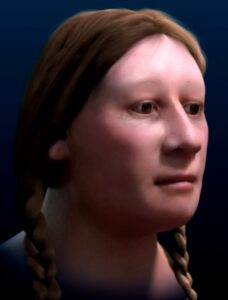 The story of this burial, excavated in Baldock in 1989, is one of a real person who was a child when the Roman invasion of Britain happened and who died around AD 70. It shows how we can engage with the humanity of the distant past and why excavating burials is not just ‘grave robbing’ but an important way of learning about people.

The woman’s family lived in the Roman town of Baldock, where she had been born; we don’t know what it was called just as we don’t know the woman’s name. It was a prosperous market town, where farmers from nearby villages could bring their produce to sell and buy manufactured goods. Some were made locally, in the town itself, but others were traded across the whole of the Roman Empire. The townspeople were comfortably off and had a good standard of living. The town had an unusually large number of cemeteries, though not all of them were in use at the same time. Some graves contained people’s skeletons while others held the ashes that are left after a cremation, sometimes in a container or sometimes in a pile at the bottom of the grave pit. Some of the cemeteries were formal affairs, with fences or hedges, paths and memorial buildings. Others were just collections of graves in a corner of land or next to a roadside.

During the building of the Clothall Common estate in Baldock from 1980 onward, several of these cemeteries were discovered and excavated by archaeologists from Letchworth Museum, including the writer. The oldest date from about 50 BC and some continued to be used after AD 500. One of these cemeteries was excavated before Stane Street was built in 1989. It was a triangular cemetery that lay between two roads. It contained almost 100 graves, dating from about 10 BC to AD 100.

All but one of the burials consisted of skeletons. Most of them were laid on their backs in the grave, their heads at the north-eastern end. A few were in more unusual positions, laid on their sides with their knees bent or carefully arranged in very large graves. One grave contained the skeleton of a woman who had been laid to rest on her right side with her left arm bent at the elbow and her hand in front of her. Her head lay at the south end. Early on in excavating her grave, the tiny bones of a newborn baby became visible behind her right shoulder. 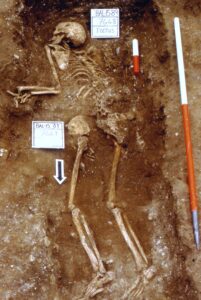 This made those of us working on site that day think that both she and her baby might have died during childbirth, which happened to a lot of women before modern medicine was available. Then, in cleaning between her hips, the bones of a second baby were found. It was stuck inside the mother’s birth canal the wrong way round; this is known as a ‘breach birth’ and was obviously the reason she had died. At this point, we began to think that she was the mother of twins. It was only when the archaeologists excavating the grave cleaned around her left hip bone that the bones of a third baby were found, still inside the woman’s body so no-one would have known that she was expecting triplets.

Later examination of the bones showed that she died when she was 40 years old, give or take a year or two. This was old for a Romano-British woman to be having children, as most became mothers when they were in their late teens. She was in good health and strong, although she had recently suffered an ankle sprain, and it was a problem with childbirth that caused her early death. All three babies were about a month premature, so she may have gone into labour unexpectedly. She certainly had no help from a doctor or midwife during the birth, as they had tools that would have helped her and probably saved her life. A few years later, a man in his 50s or 60s was buried across the top, his head resting above her outstretched left hand. Was he her husband and the father of the babies?

We know that there were doctors and midwives in Roman Britain who could have saved the mother, though probably not the babies. Unfortunately, good doctors in the Roman world were expensive and in days before there was anything like a National Health Service, only the very wealthy could afford decent medical treatment. Although the woman’s family was comfortably off, it wasn’t rich enough to afford a doctor. It’s more puzzling that she seems not to have been helped by a midwife and we can try to think of reasons why she wasn’t. Was she perhaps stuck out in a farmhouse a long way from town, with her family doing business in the market, so that when they returned, it was too late to get help? The babies weren’t expected for another month, after all. Or perhaps the midwives were busy with other people’s babies. We will never know the answer to these questions.

In 2010-2011, Shine TV made a documentary about this burial, broadcast as part of BBC 2’s History Cold Case series. You can watch it on YouTube.

Her sad death is the first recorded case of triplets from anywhere in the world and we only know about them because all four died at the same time. Her reconstructed face is the first time we have been able to see what an ancient inhabitant of Baldock looked like. This is one of those cases where archaeology brings us into the stories of everyday life and death in the past.