Published Wednesday 1 May 2013 | By Keith Fitzpatrick-Matthews 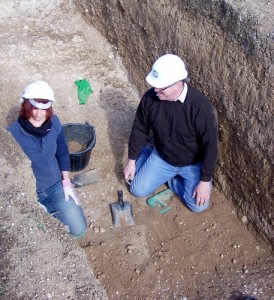 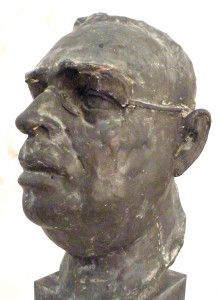 Sir Themistocles (Temi) Zammit (1864-1935), in a bronze by Victor Diacono in the National Museum of Fine Arts, Valletta

Malta is well know for its Neolithic temples, which include some of the oldest stone structures in the world (only Göbekli Tepe, in south-eastern Turkey, is older: even the pyramids of Egypt are not as old). I visited one of the most famous, at Tarxien (pronounced “Tar-sheen”), for the fifth time while away. It was discovered when a farmer turned up large pieces of stone when ploughing a field early in the twentieth century. Sir Themistocles (“Temi”) Zammit, the island’s principal archaeologist at that time, spent several years excavating the monument and his work there turned up some of the best-known images of prehistoric Europe: spiral decorations, images in low relief of bulls and the lower part of a colossal statue of a very fat person wearing a skirt or kilt (usually assumed to be a woman, for no very good reason). 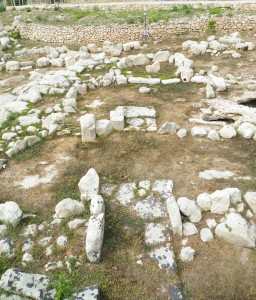 The Ġgantija phase temple at Tarxien, c 3100 BC

Although the earliest temple at Tarxien dates from the earliest phase of massive temple building (known as the Ġgantija Phase, after a temple complex on Gozo), the style reached its peak with a later Neolithic seven-roomed structure built to its west. This is more-or-less contemporary with the henge at Stapleton’s Field, dating from around 3100 to 2500 BC: our henge site was probably built around the same time as the earliest of the temples at Tarxien and was perhaps abandoned around the same time as the latest. Both were constructed by Neolithic farming communities and it is instructive to realise that in both places, the work required was enormous and would have put a real strain on agricultural productivity.

It is often tempting to think of prehistoric peoples as “primitive”. This is an attitude that goes back to the beginning of archaeology, when wealthy Victorian gentlemen who saw themselves as the pinnacle of civilisation viewed people in Africa, Asia and the Americas as “savages”. They compared the societies of these people with what they could discover about the European past and saw many similarities. Of course, there are parallels to be drawn between ancient societies and those that ethnographers study today, but we should not be so quick to make ill-considered value judgements. 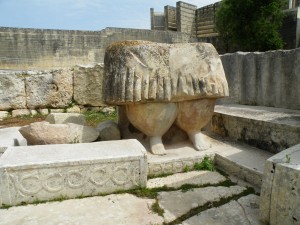 The so-called “Fat Lady” of Tarxien (actually a reproduction: the original is in the National Museum of Archaeology in Valletta)

The people who built the Tarxien temples and Stapleton’s Field henge were as intelligent and sophisticated as we are. Their lives were as rich and full of joy, conflict, love and pain as our own. The differences between us are largely those of technology and the scale of our societies. The globalised world of the past century or so depends on a range of technologies that make the movement of heavy objects so much easier and the communication of ideas so much faster than they were in the Neolithic. Neolithic farmers lived in dispersed communities; coming together for seasonal meetings at places like Tarxien or Stapleton’s Field was their main means of communication, of learning new ideas, and was probably an occasion for employing a lot of muscle power. These people were not constrained by the sorts of deadlines we have: like the builders of a medieval cathedral, they were content to spend decades, even centuries, building their monuments. 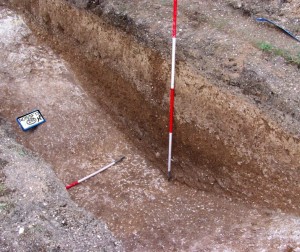 This is an important lesson from prehistory. The technology of Neolithic farmers may have been primitive in comparison with ours, but we can still be awe-struck in front of their achievements. As an archaeologist who has shifted untold tonnes of soil over the years, I am well aware just how much effort was put in by the people who excavated the outer ditch of the Stapleton’s Field henge to a depth of 1.5 metres and a width of 5 m using only antler picks and cattle shoulder-blade shovels.

I am hoping to be able to reveal the date of the pig bone from the henge around the end of May.

In the bleak midwinter (actually an English spring day)

Difficult as it is to believe that we are now in spring owing to the continued presence of snow on the ground and the threat of more to come, today saw topsoil stripping for our Easter weekend small-scale project. It’s more in the nature of an evaluation exercise than a full-blown excavation: we have stripped a linear trench across the line predicted for the henge outer ditch on the basis of the 1996 magnetometer survey. In previous years, the location of the ditch has been masked by the presence of an unknown depth of colluvium; in 2012, an area of colluvium was removed by machine down to the chalk bedrock, at which point (to the east-north-east of the centre of the henge), it was more than half a metre deep. This was a cause for concern, as the depth meant that we would never get into the ditch fills using the 100% recovery and three-dimensional recording of all finds that we had been practising up to that point.

In addition to this worry, I was concerned that the scale of the ditch suggested by magnetometry (between 3.5 and 5.0 m wide at the top) might indicate a commensurate depth. I had visions of Alexander Keiller’s excavation of the outer ditch at Avebury, where the V-shaped ditch was more than 11 m deep, with a width of 21 m at the top: a similar feature at Stapleton’s field might be almost two metres in depth. Then I was puzzled by the results of the 2011/12 resitivity survey, where the spread of colluvium was visible but the ditch was not. On the one hand, I thought that maybe the colluvium was so deep (perhaps a metre or so) that the outer ditch could not be detected at the resolution achieved (at a depth of a metre, using the survey technique employed, most features would be invisible); on the other, I was heartened by the likelihood that a ditch two metres deep would show up regardless of the depth of colluvium sealing it. Either way, I was beginning to suspect that the ditch was of a more manageable size.

I arrived on site slightly late (about 8.40) to find Tony, Nigel and Jim chatting to the digger driver. Under the snow, it was possible to make out the outline of last summer’s trench, which made it reasonably easy for me to locate the rough centre of the henge. I had already decided that we would open our exploratory slot down hill from the centre of the monument, where the colluvium was likely to be thinner (we knew from last year’s project that it did not extend as far to the south-east as the Roman enclosure ditch). The machine could then cut a trench up to 20 m long from the outside to the inside of the henge. This way, we could minimise the potential damage to deposits within the outer ditch.

The first glimpse of the outer lip of the ditch

There was barely any colluvium at the south-eastern (downhill) end of the trench, although it began to show up within a metre or so of the end of the trench. In the conditions on site (it was -2° C and icy), it was difficult to see artefacts within the colluvium, although Tony managed to identify a piece of Roman tegula, with part of the flange visible. After cutting back for over five metres, with the colluvium becoming increasingly thick (it has reached a depth of perhaps 0.25 m at this point), the chalk bedrock suddenly dived down. This was the outer edge of the ditch, exactly where the magnetometer survey had predicted it to be. It was clear straight away that the side of the ditch was not steep, perhaps around 45°, which raised my hopes that it would prove to be reasonably shallow.

The machine was used to empty the ditch of its contents. Although it is too early to be certain, it appeared to contain only one fill, which was sterile (or, at least, contained too few artefacts and ecofacts to be visible during soil stripping). If true, this is intriguing. It suggests that the ditch filled in a single episode; in other words, it was deliberately backfilled. If this proves to be the case, it explains how the ditch was so full that a colluvium formed over it north-west of the henge from the Late Neolithic onwards (the infamous context (35) that we spent so long excavating in 2011 in the mistaken belief that it was indeed the upper ditch fill). If it is a deliberate backfill, it raises some intriguing issues: why would the outer ditch have been filled and how much effort would have been required for the undertaking? This might be yet another indication that the early ‘formative’ henge was converted to the classic type some time before the middle of the third millennium BC.

The ditch proved to be at the upper limit of size suggested by magnetometry, around 5 m at the surface of the chalk. However, its sides sloped quite gently. Although we stopped the digger at a depth of 1.2 m from the ground surface for health and safety reasons, the angle of slope of the ditch suggests that there is less than half a metre of deposit left in the bottom. We will therefore be able to excavate a slot through the base, where there ought to be some indication of primary silts (and, I hope, something that can be dated). This means that the ditch is no more than 1.7 m deep (and cut under 1.5 m into the bedrock). This is very encouraging for the summer as it means that it will be possible to excavate a complete section through it by hand whilst maintaining our three-dimensional finds recording system.

At last, the outer ditch is visible

After locating the inner edge of the ditch, another 1.5 m of topsoil and colluvium was stripped. At this point, over the berm between outer ditch and bank, the colluvium appears to be at least 0.4 m deep, confirming the observation to the north-east of the henge last year. After tidying up the soil scattered by the machine around the top of the trench, we left it until Friday (there is little point in cleaning up inside the trench, as more soil will have fallen in by then). I left around 10.15, while Tony, Nigel and Jim began putting up the hazard fence around the trench as, although it’s in the middle of a field, we need to ensure that people don’t stumble into it in the dark.

The forecast for the weekend isn’t good: there is supposed to be a high risk of more snow on Thursday or Friday and temperatures are not due to get above around 5° all week. This is hardly what one expects for an early spring project, but it’s necessary for understanding the monument. I will be back to blogging on Friday, when we return to clean and record what has been exposed. I also hope that it will be possible to excavate the soil in the base of the ditch. If we are lucky, there may be a primary silt with organic remains in it.