North Herts Museum is always happy to offer work experience placements for interested young people; many of us got our first taste of museum work in a similar way. Last week, Tom, a student from St Christopher School in Letchworth Garden City, spent some time looking at the finds from an old excavation. The finds were deposited with the Museum Service more than ten years ago but no-one had had the opportunity to look at them since then.

I was interested in looking at the finds because they were excavated from a site at the east end of Works Road in Letchworth Garden City, only a few hundred metres from the henge in Norton that I have been investigating recently. The original work was carried out between 1997 and 1999 by the Hertfordshire Archaeological Trust (now Archaeological Solutions), who discovered important Late Neolithic features, dating from about 3000 to 2000 BC. These included a hengiform monument with the crouched skeleton of a teenager at its centre, some deep shafts, a curious banana-shaped pit and an L-shaped ditch. A report on the flints found compared them with those found at Blackhorse Road, a site excavated between 1957 and 1973 by Letchworth Museum, just 200 metres away. I wanted to see for myself how similar they were to the flints from the henge and, perhaps more importantly, to see how their small quantity of pottery compared. 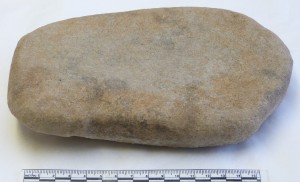 Smoothed slab with a groove along the centre

As expected, the types of flints were very similar, with some rather nice scrapers and denticulated blades. By the end of the week, Tom had learned how to spot the difference between scrapers, blades, débitage (waste flakes from striking the flint) and cores. He also spotted some stone objects that were rather more unusual, which had me puzzled at first. Two of these objects consisted of flat slabs of a gritty sandstone-like material, about the size of my hand. One surface on each had been polished smooth and, on one of them, a polished groove had been worn into the centre of the stone’s long axis. There was also a cube of stone with one face polished and a pebble with a pointed end that was damaged as if it had been used as a hammer, which is what I thought it was at first. Then I spotted that it was also worn along one edge and that it fitted into the groove on the slab almost perfectly. 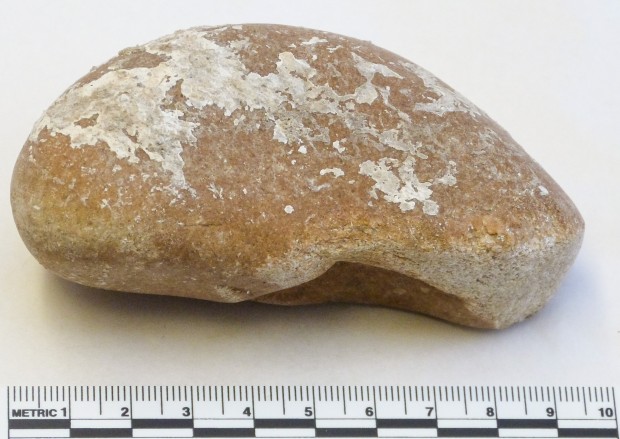 Grinding stone, worn at the pointed end and along one side

This was the clue I needled to answer the puzzle.The slabs were hand-held palettes, used for grinding something, while the other stones were the grinders. The cube had not worn into the face of the slab, but the different shape of the pebble had gradually worn down a groove. Unlike larger querns, slabs that were used for grinding flour from grain, these were designed to be held in the hand for grinding small quantities of something. Palettes have been recorded in the Neolithic of other parts of the world – the decorated cosmetic palettes of Egypt are well known – but they are not widely reported from Britain. I suspect that the pair from Letchworth Garden City were used in a similar way to the more decorative Egyptian examples, for grinding pigment to use as cosmetics, perhaps for religious ceremonies rather than general beautification. To have two together is really quite unusual, if my identification of them is correct. 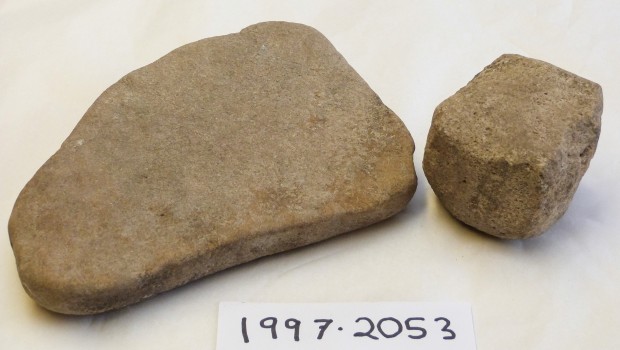 The discovery of these palettes has turned the site at Works Road from one that is merely interesting to one that looks to be rather significant. With the early henge only 300 m away, flint mines closer still and a hengiform monument on the same site, this is a complex to rival many better known sites. It goes to show that important discoveries can be made away from the site, by people who, like Tom, are not trained archaeologists. Thank you, Tom!

Don’t forget to book your place on our Behind the Scenes tours! See how staff are preparing for the new North Hertfordshire Museum. Find out about the history of the buildings and the museums. Have a look at objects as they are cleaned and packed.

Tours are free, start at 10am and last approximately 40mins. Spaces are limited and tours must be booked in advance (tours without sufficient bookings may be rescheduled).

You can book onto a tour at Letchworth Museum or Hitchin Museum (or one of each!).

One hundred years ago today, Barry Parker, one of the architects of Letchworth Garden City, wrote a letter giving a fascinating insight into the beginnings of Letchworth Museum and the people involved in setting it up. 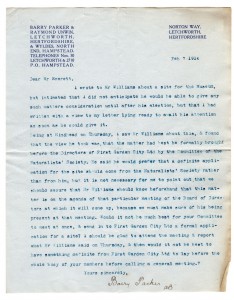 A letter from Barry Parker

A W Brunt gives a good summary of the setting up and early years of the museum in his book “Pageant of Letchworth”. He wrote this while he held the Chair of the Naturalists’ Society, a post he had taken up in 1923 and continued to hold into the 1940s, so he would have experienced it all first hand.

There had been talk about having a museum as part of the new Garden City for several years. In 1906 the Letchworth Citizen mentioned that part of the original plan for Howard Hall had included a museum to show the archaeology that had been uncovered on the Garden City Estate. When the Garden City Naturalists’ Society was set up in 1908, it included amongst its aims ‘the formation of a museum’. Other members of the Naturalists’ Society included Barry Parker and W P Westell (who was to become the first museum curator), and the Secretary in 1914 was Rev E Everett, to whom this letter is addressed.

Though he had written to Mr Williams, Barry Parker notes that he “did not anticipate he would be able to give any such matters consideration until after his election”. In January of that year, Aneurin Williams was elected as the Liberal candidate for North West Durham.  A month later, Barry Parker had managed to meet him to discuss the museum matter further, and so plans had been put in place at this point to progress the project.

Though 100 years seems a long time ago, the letters and newspapers from this time reveal familiar stories. Just as these men spent many years discussing and working towards the building of the Letchworth Museum, so the museum service and people of North Hertfordshire have long been talking about the plans for our new museum.  It will be interesting to follow the progress of the plans from 100 years ago in future blogs, and note at the same time the progress being made in our own project as both move towards realisation.