The Museum Service has just published two new booklets on the archaeology of two villages in the District: one on Codicote, the other on Kelshall. The first was published jointly with Codicote Local History Society, the second with the North Hertfordshire Villages Reaearch Group. Using data from the Historic Environment Record maintained by Hertfordshire County Council and the database of metal-detector finds run by the Portable Antiquities Scheme, they tell the story of the origins of the two villages. 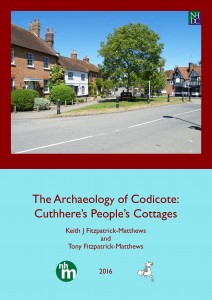 The Archaeology of Codicote, published 2016

The Codicote booklet describes the landscape setting of the village and looks at the diverse landforms and soil types that have helped shape where people decided to settle in the past. Using prehistoric finds, some published here for the first time, it looks at how people opened up the landscape for farming and buried their dead on hilltops overlooking the River Mimram. By the end of the first century BC, the area was in the hinterland of a growing and prosperous settlement at Welwyn. The sites of two Romano-British farms have been found, but there were probably many others.

In the centuries after the collapse of Roman rule, a man named Cuthhere owned some cottages that gave the settlement its name: Cuþheringcoton, Cuthhere’s people’s cottages. The limited archaeological evidence for the period suggests that they lay somewhere around the present High Street, perhaps around the junction with St Albans Road, where a market was late held in the Late Middle Ages. Documents tell us about a second place, Oxwick, that has been lost. It was mentioned in the will of a man name Wulf, who died about 1050, and in Domesday Book, compiled in 1086. Wulf seems to have been a priest: could St Giles’s Church, which lies 600 m away from the village centre, have been his church at Oxwick? Wulf’s donation of his land to St Alban’s Abbey followed a similar donation by King Æthelred II (the ‘Unready’) of Codicote in 1002. By then, this was a well settled medieval landscape perhaps very similar to today’s. 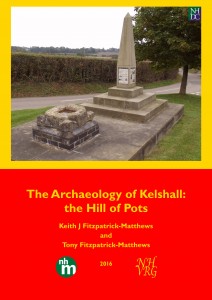 The Archaeology of Kelshall, published 2016

The Kelshall booklet is based around a remarkable collection of metal detected finds from across the parish, which help to tell a story of a long-lived community. It begins with a site recognized only recently from satellite photographs, which suggest that Thrift Hill was the site of a Neolithic causewayed enclosure, constructed about 3800-3600 BC. These enigmatic sites may have had numerous uses, but their rarity suggests that they were regional centres, perhaps where people gathered on special occasions. Later, the hills in the north of the parish attracted burial mounds, dating from about 3000 to 1400 BC.

In the years before 100 BC, new earthworks were dug across the landscape, running for many kilometres across the slopes in the north of the parish. In places, up to four parallel banks and ditches were made. At one time, they were thought to have been tribal boundaries but we now know that there are too many of them and that rather than defining boundaries, they seem to have made people travel along them in particular directions, funneling them towards Baldock. Here, a town developed during the first century BC and its hinterland prospered. Metal detector finds show that a community was developing around Thrift Hill and Coombe Bottom.

At the top of the hills, a new village began to grow around the same time. It was connected by a road through Coombe Bottom to Avenell Way, an ancient track linking Baldock with Cambridge. Here, a spectacular find of a wealthy Roman burial was made by a local detectorist, Phil Kirk. This adds to a picture of Roman settlement in and around Kelshall that has been known since other burials were first discovered in 1877. The settlement around Thrift Hill survived the end of Roman rule and metal finds suggest that it continued to exist without a break until after 800. A few centuries later, Kelshall was mentioned in a charter of King Edward the Confessor (1042-1066) and it may be that the church of St Faith was established by then. Its Old English name, Cylleshyll, may mean ‘the hill of pots’, perhaps referring to early medieval discoveries of Roman burials; Orwellbury, one of the medieval manors, seems to derive from Old English hordwiell, ‘treasure spring’, hinting that more valuable things had also been dug up nearby.

Both booklets tell the stories of communities: we often think of villages as unchanging relics of the Middle Ages or before, but archaeology shows that people often moved their homes between different parts of the landscape. They deal with people, rather than dusty artefacts and crumbling monuments.