For a week or so in August, I worked as a volunteer at the as-yet-to-be-opened North Hertfordshire Museum in Hitchin. I wanted to do some work experience to put on my personal statement, as I am interested in studying History at university and thought working at a history museum would be an interesting experience to include.

I was given a job to do on my first day. In the museum, which contains a variety of valuable museum pieces collected from all over North Hertfordshire, there is a map (presumably printed in the 1930s) called the ‘Incident Map’, which shows us where Axis bombs were dropped in and around the Hitchin Rural District during World War Two. 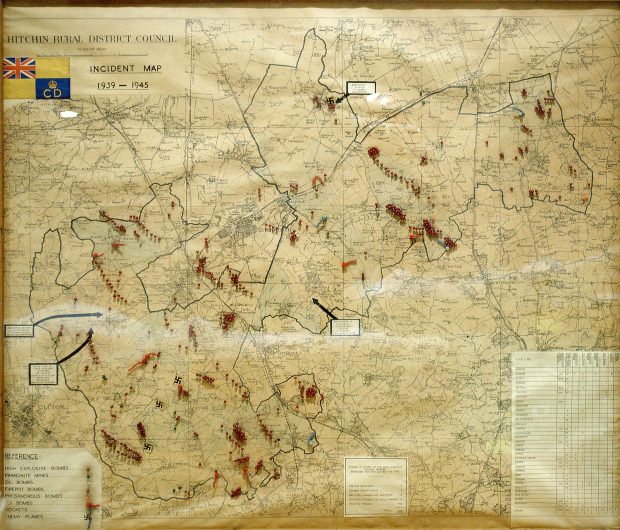 The map (which was originally on display at Hitchin Museum) has a key with eight symbols on it. These symbols each represent a different bomb or object that landed in the Hitchin Rural District during the war. The eight ‘subjects’ that are featured on the map are: ‘High Explosive Bombs’, ‘Parachute Mines’, ‘Oil Bombs’, ‘Firepot Bombs’, ‘Phosphorous Bombs’, ‘Fly Bombs’, ‘Rockets’, and ‘Enemy Planes’. The final one, ‘Enemy Planes’, was marked by a Swastika (the symbol most typically associated with the Nazis during World War Two). 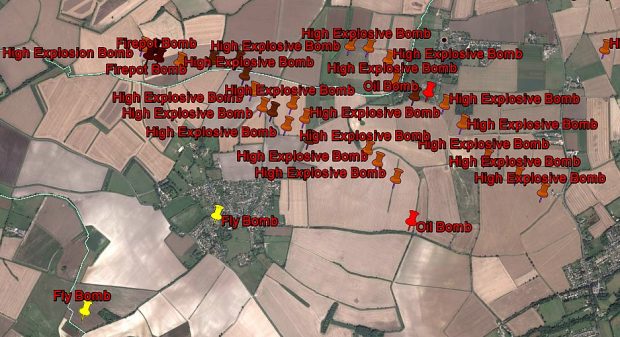 Bombs dropped between Pirton and Holwell on a modern background

This map indicates that all these bombings took place throughout the war, from 1939 all the way to 1945. The task that I was given to do at the museum was to start mapping out these bombing positions on Google Earth, so then people could see where the bombs landed in relation to our present-day geography. I was given this job due to my personal fascination with World War Two and in general modern history. There are plans for the Google Earth map to eventually be processed, so then people can interact with it in the museum. 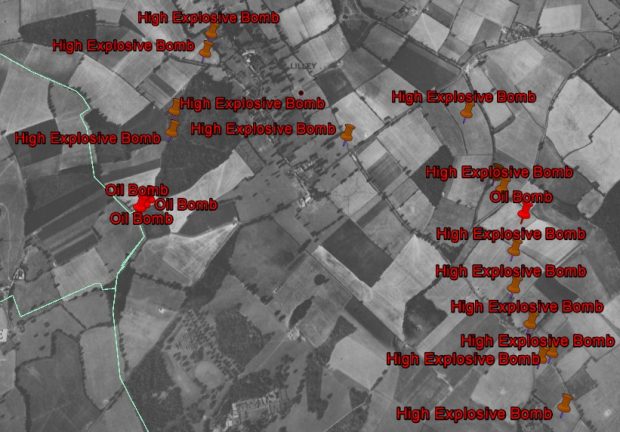 Incidents around Lilley mapped onto an aerial photograph from 1945

Knowing exactly where the bombs fell in North Hertfordshire in relation to how the county’s land is laid out now and being able to interact with it will hopefully help people to learn more about our local history then they could before now. I finished placing all the bomb markings on except for the ‘High Explosive Bombs’. I started on them but found that there were simply too many to finish by the end of my tenure at the museum. However, I got the vast majority of the bombs mapped out onto Google Earth.

The bombs so far mapped by Dylan shown in Google Maps

Yet I think I have made a positive start to the project in which the museum workers can continue to work on. I had some trouble with the scaling, and so I am not completely confident that I have placed all the markings from the map in the right spot on Google Earth. However, I feel that overall I have made a significant contribution to the North Hertfordshire Museum and helped them in their goal of preserving North Hertfordshire’s culture and heritage.