Royston is one of the four towns of North Hertfordshire and was a medieval ‘new town’ that grew up around an Augustinian Priory founded at the junction of Ermine Street (now the A10) and Icknield Way (now the A505). Its communities are Royston, the main settlement, and Sunnymead. 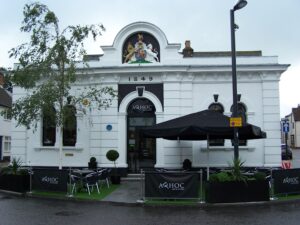 Royston Museum’s website gives details of opening times and the history of the town. The Royston and District Local History Society’s website publishes research into the town’s past.
Royston Town Council’s website has links to what’s on in the town and to other sourcees of information.
Royston’s entry in A Vision of Britain

Royston does not appear in Domesday Book. It was was part of the parishes of Therfield, Reed and Barkway (in Hertfordshire ), and Bassingbourn and Melbourn (in Cambridgeshire).

The UK and Ireland Genealogy website explains where to find parish registers.
The Family Search website links to free and subscription resources.