Hitchin is one of the four towns of North Hertfordshire and the one with the longest continuous occupation, which began in the fourth century AD. It contains the communities of Hitchin and Charlton. 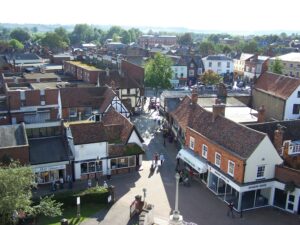 Market Place seen from the tower of St Mary’s Church

Hitchin’s community is well-served by local groups. Hitchin Historical Society has been researching to town’s past since 1977 and regularly publishes books and pamphlets dealing with aspects of its history.
Hitchin BID’s website has information about the town today and links to local businesses.

Hitchin’s entries in Domesday Book. The second entry is for Charlton.