Our football collection owes its creation to local man Vic Wayling. Vic became Honorary Secretary of Hitchin Town Football Club in 1952 and recognised that the club had few or no records of its own history. Vic appealed to the football world for objects and records relating to Hitchin Town FC. Surprised by the level of response and offers of non-Hitchin football objects from far and wide, the idea of the World’s First Football Museum was born.

You can browse our online database of foootball related objects here. 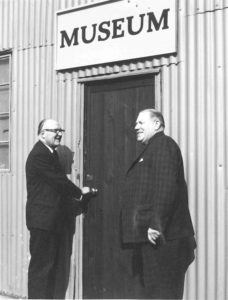 Opening the Football Museum at Top Field, about 1960

The museum was first housed at Legion House in Paynes Park, Hitchin, opening on 3 October 1956. It moved shortly after to a purpose-built building at the site of Hitchin Town Football Club in 1959-60. The whole collection, numbering almost 1000 objects, was donated to the North Hertfordshire Museum Service during the 1980s. Key objects from this collection are on show in a large display case in the Terrace Gallery. The collection consists of items of local, national and international importance. This includes articles such as programmes, badges, football kits, and memorabilia from amateur and professional teams, as well as objects donated by members of wider footballing society like referees and football journalists. It ranges in time from the very early days of association football in the 1800s to objects from the 2000s. The collection also has a broad geographic range, with objects from many different countries.

Bert Trautmann’s Neckbrace
Bert Trautmann, former Prisoner of War, turned goalkeeper for Manchester City made headlines in the 1956 FA Cup Final versus Birmingham City, breaking his neck in a collision and carrying on, finishing the game as an FA Cup Winner.

Stanley Matthews’s Football Boots
Stanley Matthews was a player before his time. Often known as the ‘Wizzard of Dribble’ for his amazing skills on the ball. Matthews was particularly notable for playing professionally until he was 50, assisted by an attitude to diet and exercise not seen in the rest of football at the time.

The Aubrey Cup
The Aubrey Cup is a football mystery. The cup is believed by some to be the oldest (and heaviest) football cup in the world.

The Tripoli Cup
The Tripoli cup tells of the role football has played in wartime to boost morale of soldiers. The Tripoli Cup was won by a team of soldiers who took on the name Wolverhampton Wanderers after the West Midlands football team.