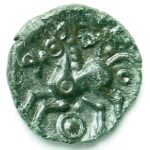 The Museum Service has always collected coins: the first item accessioned to Letchworth Museum in 1914 was a collection of 30 English silver coins. Since then, the collection has grown partly through donations and partly through excavation, especially for Iron Age and Roman coins. Today, we can tell the story of coinage in Britain using these objects.

The Iron Age coins are local finds and are typical of the types that were used in the powerful pre-Roman kingdom north of the River Thames, with a few exotic types imported from outside the area. Roman coins cover the entire period of Roman rule in Britain from the conquest of AD 43 to the end of direct rule after 410. Many of these coins came from excavations in the Roman town of Baldock. 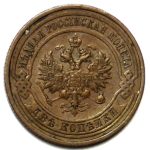 Medieval coins range from a penny of Offa (King of Mercia 757-796), who introduced this unit of currency, through to late medieval issues from the time of the Wars of the Roses. We also have counting-house tokens (known as jettons) from England, France and Germany. Early modern coins became more diverse, with many different values being produced. As the crown did not make farthings (¼ pennies) or halfpennies from the 1650s to 1672, local businessmen were able to make their own tokens; we have a complete collection of those made in the towns and villages of the district. We also have some paper money and cheques drawn on local banks.

We also have a smaller collection of foreign coins, mostly collected before the 1960s, and from all over the world. They include colonial issues of the British, French and German Empires, coins from most European countries and some ancient Mediterranean coins. We no longer collect this type of exotic coinage.

The collection also includes medals, both commemorative and military, as well as gaming and company tokens.