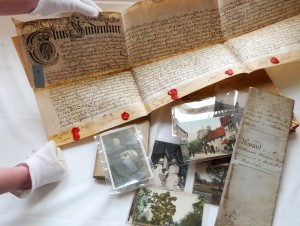 North Herts Museum Service has just been awarded £700 by the East of England Regional Archive Council (EERAC) to improve access and storage of our vast archive collection.

You may not know it, but Hitchin Museum has a store full to the rafters with documents, photographs and maps. These have been used by hundreds of researchers over the years, as well as museum staff when creating exhibitions.

The chairman for EERAC was very impressed by the quality of documents we hold when he visited recently. The archives contains a whole array of photographs and postcards from the whole district, as well as poems, personal accounts and diaries of people who have lived in North Herts over the years. Some of the manuscripts date back to the 17th century and contain wax seals and are pretty hard to decipher for the untrained eye.

The grant money EERAC have kindly awarded us will go towards funding new storage files for the documents, these will be archival quality and will help to protect the items for much longer. So we are now starting an archive project, where volunteers from the Hitchin Historical Society will assist staff in repacking the archives and making sure documentation is up to date, so everything will be much more readily available and accessible when they are moved to the new museum for 2015. Here, alongside digital records of the museum collections, they will form part of the new study area where visitors will be able to come and find out more about how people have lived in North Herts.

A hole that appeared in a farmer’s field

On Wednesday 5 June 2013, I was telephoned by a Mr King, who explained that a deep hole had appeared in his brother’s field in Kelshall, 4.8 km (3 miles) south-west of the centre of Royston. It had appeared during the beet harvest earlier in the year and the harvester had almost fallen into it. As it was close to a public footpath, the brothers were concerned that it might pose a danger to walkers (as well as hindering their ability to farm the field). They were keen to get an opinion on what it might be, so I arranged to visit the site on the morning of 7 June.

On the day of my visit, there was only a low growth of crop in the field, around 25 cm high, but this was enough to make the hole invisible from all angles. It only became visible as a slight depression in the field surface from around ten metres away. This alone made it dangerous, as it would be easy to stumble into it in poor light, especially if one were not paying attention: a running dog would be even more vulnerable. 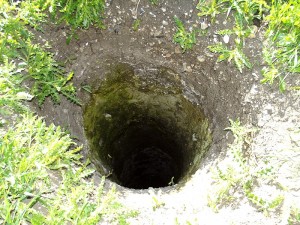 The hole in the King brothers’ field at Kelshall

The hole proved to be a vertical shaft cut directly into the chalk. It was circular and had a diameter of around a metre. Above the chalk, there was a depth of about 70 cm of topsoil over the top of the chalk, more than double what I would expect in a ploughed field at the highest point in the village. This gives a valuable clue about the nature of the shaft. The bottom of the cut could not be seen in the strong June morning sunlight, so Mr King and I tied a stone to a measuring tape I had brought with me and we lowered it into the hole; it hit something solid at a depth of about 4.3 m, although I learned from the farmer that when it had first appeared, he had measured it as more than seven metres deep.

The edges of the shaft were clearly deliberately cut, with blade marks visible in places. This rules out a natural explanation, such as a sinkhole. At the same time, there were no hints that it had ever been lined, either with bricks or timber. No datable objects were visible in the soil around the top of the hole. 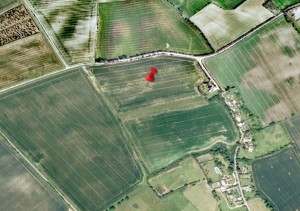 Cropmarks at Kelshall showing the location of an abandoned settlement

There were already clues about what the hole might be. Aerial photographs have revealed cropmarks of linear ditches, including a possible ditched trackway, running through the field, recorded in the Hertfordshire Historic Environment Record as number 6218. The field immediately to the west has also revealed cropmarks, including pits and ditches (Historic Environment Record number 16981). These suggest that this hilltop was formerly the site of human habitation and the presence of a ditched trackway suggests that it might have been occupied during the Roman period (AD 43 to 411).

This makes sense of the feature. During the 1970s and 1980s, a number of Roman wells were investigated at Clothall Common in Baldock, most of which had the same character as this hole: cut directly into the chalk bedrock with no lining, at least, not below the topsoil. Most of them had been left at least partly open when the well stopped being used to obtain water (perhaps when the water turned sour, as can happen), and the top would gradually erode and fall into the shaft. This creates a cone (known as a “weathering cone”) around the top of the well: this is what made the topsoil appear unusually deep in this example, as we were looking at the soil inside the weathering cone, not just the topsoil.

So the King brothers have a Roman settlement on their land. The abandoned well, which had probably never been filled in properly, suddenly appeared in their field when the fills at the top suddenly slumped and fell to the bottom of the shaft. In looking at the aerial photographs, it is possible to see the position of the well in relation to the buried ditches. It appears to have lain close to the track through the settlement, which seems to have been more extensive than a single farmstead. We have a new Roman village to add to the map, thanks to Mr King!

I was very pleased to attend to the “Letchworth Stories, Celebrating South Asian Heritage” event on the 12th June,  along with my colleague Sharon McCafferty, on behalf on North Hertfordshire Museum Service. 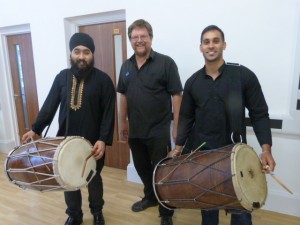 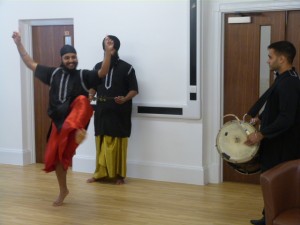 This event celebrated the work that has taken place on this Heritage Lottery Funded project so far and was an opportunity to  launch the project to the wider community.

It took place at  North Herts College, and consisted of delicious refreshments and Indian food, as well as a live performance by The Dhol Drummers Bhangra dancers, followed by audience participation in which we all learnt some of the basics of Bhangra dancing!

The event was well attended, including members of the community who have already been involved with the oral history and reminiscence work, and students and staff from Wilbury Junior School, University of Hertfordshire and Letchworth Community members, who produced a special a special short animation for the project.