As part of Black History Month, the museum is hosting an exhibition in The Arches using photographs of Black people from around the district. You can see the pictures here. They were first shown at the old Hitchin Museum in 2007 and were published in a book, North Herts African Caribbean Roots by Eric Blakeley and Gurdev Delay. The project had support from the Heritage Lottery Fund (as it was then called) and the book is on sale for £1 from the museum shop.

We don’t know as much as we would like about the people in these photographs. If you know anything about who, when and where, please email us! Also let us know any other comments you may have. 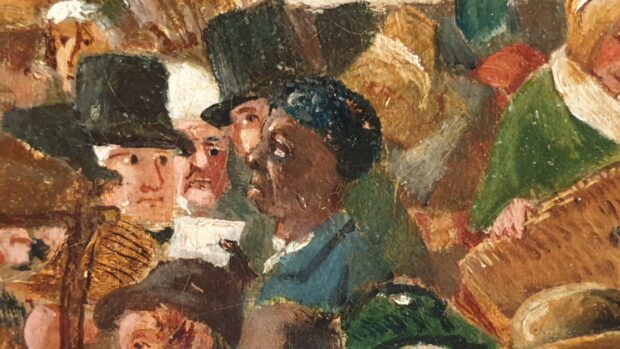 While we’re looking at mysteries, the Samuel Lucas painting Hitchin Market Place, 1840 shows a Black man giving a letter to someone. Samuel Lucas drew sketches of people from life and sometimes labelled them with a name. He did not give this man’s name. Perhaps he was so well known that the painter thought that everyone would know him. We don’t, unfortunately! Again, if you know who he is or are descended from him, please email us.

Finally, our Learning Officer Cas has put together an interactive about Black people in Victorian North Herts.

Cllr Sam Collins discovered a scatter of Roman tile in a field near a Scheduled Ancient Monument during the lockdown of early 2021. Together with Keith Fitzpatrick-Matthews from the Museum Service, he is organising some fieldwalking to see what more can be found and how extensive the site may be. There is a story in The Comet online.

If you want to be involved, we’ll be meeting where Purwell Lane turns to meet Kingswood Drive. 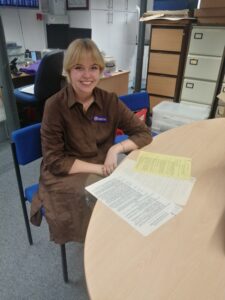 Mia with some youth group archive

I thoroughly enjoyed my time at North Herts Museum. In addition to gaining experience working as front of house, I got to see everything behind the scenes. I gained access to some amazing spaces such as the Archive, the Art Store and the Costume Store. The collections were extensive and fascinating. I received an in depth tour of the galleries and had several interesting discussions with the curators about how each display was carefully curated. I learned a lot about Digitisation and Data Entry, as well as being given the task of sorting through a collection of minutes describing youth groups/youth culture in the 60s and 70s. I also had the pleasure of organising and numbering a collection of stones painted by a local school during lockdown. A lot of the stones consisted of topical and inspirational messages advocating for BLM, LGBTQ+ rights, gender equality and celebrating the NHS. It was lovely to see children using their creativity to make a positive change during the pandemic. I was also able to work with a group of children in a hand print workshop which tied into the wonderful ‘Tiger Who Came To Tea’ exhibition. Working with the public has been very enjoyable. I would like to thank the whole team at North Herts Museum for being so welcoming and helpful and for giving me some exceptional careers advice. It’s thoroughly prepared me for my MA in Museum and Gallery Studies.

Good luck on the MA from all at North Herts!