In October 2014, Phil Kirk was metal detecting on a field in the hills south-west of Royston, when he encountered a strong signal. Digging down about 15 inches, he found the top of something bronze. Thinking initially that it might only be a modern filter from a car, it turned out to be a complete Roman jug, missing its handle. On lifting it, he spotted the handle and bowl of a bronze patera (a dish for pouring libations). Next to this lay the battered bottom half of a large jug and last of all a third jug in four or five pieces, apparently crushed by a large flint, with a trefoil mouth. All four vessels came out from a hole no more than 50 cm across. Quite by chance, the broken base of the third vessel matched a bronze object found a few months earlier and about ten metres away, which had been discarded under a nearby hedge as probably twentieth century but which was the top half of the jug. 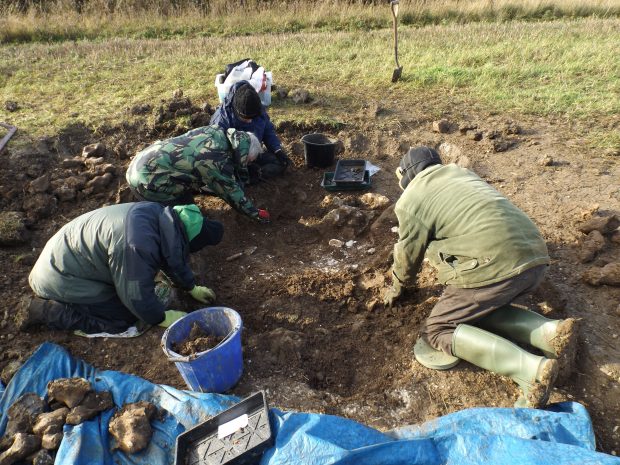 It was clear that this was something important, so Phil contacted Julian Watters, Finds Liaison Officer for Hertfordshire and Bedfordshire. Julian then contacted Keith Fitzpatrick-Matthews, then Archaeology Officer for North Hertfordshire District Council, who agreed that it would be a good idea to conduct a small excavation around the hole. So, on a cold morning in late October, we went up to the site, accompanied by another detectorist, and expanded the original hole to a one metre square.

During the course of the digging, the missing jug handle turned up but it proved impossible to find an edge to the hole that the bronze vessels had originally been buried in. The vessels also appeared to have been covered with massive flint nodules. It was clear that a larger excavation would be needed to find out the context of these objects. Owing to other commitments, it impossible to return before the second week of November, not a good time to be excavating on an exposed hilltop. 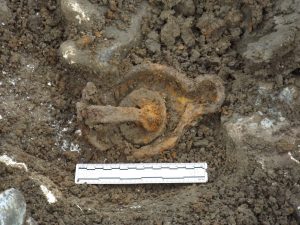 This time, the farmer scraped off the shallow topsoil over an area around 3 m square and the team set to work removing the last traces of topsoil. Soon, the rim of a glass bottle became visible, then more shards of glass. Cleaning quickly revealed a group of glass bottles towards the south-western corner of the grave. Next, an iron lamp with a crescent decoration on the suspension bar and wall mounting bracket was exposed towards the centre of the pit. It had evidently been in one piece when it was placed in the ground, but the weight of the flint nodules above it had broken it into three parts.

To the east of where the bronze vessels had been found were two layers of hobnails, from a pair of shoes placed one on top of the other. There was also a figure-of-eight shaped buckle with each shoe, probably a means of fastening the straps. Next, a bronze corner binding from a wooden tray became visible; the wood had decayed, although some was preserved around the binding, which will allow us to find out what sort of wood was used to make it. The patera had stood above another corner of the tray and some of the fragments of metalwork recovered in October that we thought were part of the patera probably came from the binding in this corner. 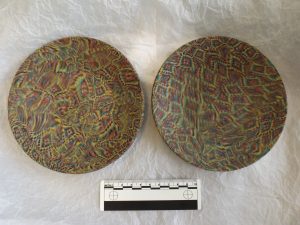 On top of the tray stood a shattered but otherwise complete shallow dish, about the size of a saucer. At first, it appeared to be iridescent from decay, but it quickly became obvious that it was composed of coloured glass in a millefiori or mosaic style. Individual rods of dark purple, white, yellow, blue and red glass had been fused into diamond patterns before blowing, creating a spectacular if rather psychedelic effect. A second mosaic glass dish sat next to it. Underneath them and on top of the second were traces of something organic and decayed that was not the wood of the box, which mimicked the pattern of the glass. Perhaps it was the remains of a cloth used to wrap these unusual dishes.

Inside the box were the shattered fragments of two clear glass cups and a pair of blue glass handles, which were perhaps part of one of the cups. There were also fragments of a lava object in very poor condition, which crumbled into fragments when it was lifted. It was too small to be a complete quernstone and does not seem to have been a decorative object, so it is unclear what it was or why it was in the box. Underneath it, at the bottom of the box, was a silver denarius of Trajan (98-117).

Next to the box was a collection of glass bottles. The largest was hexagonal, measuring 23 cm across, with a mouth 10 cm in diameter. It contained cremated bone, which we assumed to be human. Remarkably, there was a worn bronze coin sitting on top of the bone: it is an issue of Marcus Aurelius and appears to date from 174-5, although we will only be able to confirm this after it has been cleaned and conserved. The bottle was wrapped and lifted with the contents still inside it, which were excavated in the museum. It contained large fragments of cremated bone, from an adult, and two more bronze coins.

Next to the hexagonal bottle stood an unusual octagonal bottle, a form only rarely found in Britain. South of this were two square bottles, one with the letters IΛƧ (IAS) on its base and with very clear traces of a whitish residue inside it, and a rectangular bottle. The bottle with the lettered base is exactly paralleled by an example from an early third-century ditch at Cramond, near Edinburgh. The glass of the bottles was the typical Romano-British greenish glass, variable in thickness but with few air bubbles, and all of mid to late second century styles. All the glassware was completely shattered by pressure from above. 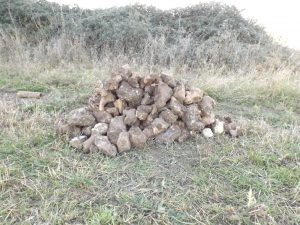 A pile made from some of the flints

The reason for the shattering was a layer of large flint nodules. At first, we thought that they were part of the grave packing, placed between the different objects, but around the edges of the pit, we found that they had been laid carefully and were interlocking. It looks as if they had formed a low mound or cairn over the top of the grave. As the contents settled, so did the flints, crushing the glassware. A number of large nails found at the corners of the area defined by the nodules look as if they were part of a large box or frame placed inside the grave, holding all its contents.

Most of the finds from the grave date from the second half of the second century: the glass bottles are all of this period and the iron lamp is of a similar date. The mosaic glass dishes are more unusual. Although the manufacturing technique appears to be Alexandrian, there seem to be no exact parallels for these two vessels, which form a pair. The colours may indicate a date around 200.

Hexagonal bottles are less common than square or cylindrical types but the larger forms are sometimes found reused as containers for cremated bone, like this one. The base is decorated with a raised ring containing a hexagon with indented sides. The square bottle with the stamped base had only a single handle, while the rectangular bottle seems to have had two. We will only find out about the others after they have been reconstructed, as they are so badly shattered. 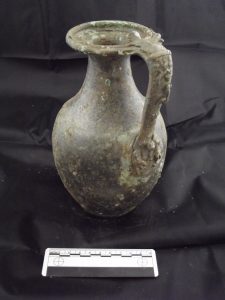 The best preserved of the bronze jugs

The bronze vessels also seem to be mainly second century types and some were perhaps Italian imports. They are all of very high quality and at least one of them appears to have been silvered. Their handles are decorated in a variety of ways. The tall bottle-shaped vessel has a handle with an agricultural or industrial scene at the base, with a figure wearing a brimmed hat similar to that worn by Mercury. Higher up is a seated figure beneath a vine from which a basket is hanging. The top depicts vine leaves and branches, which grasp the rim of the jug. The broken vessel with the trefoil opening has a handle with a head wearing a Phrygian cap at the bottom, while the top end has a deer’s head, its antlers shown in relief on the handle and its forelegs reaching forward to grasp the rim.

The patera, which is in poor condition, is plain with a raised boss (umbo) in its centre. The handle has become detached, is ribbed along its length and the terminal has a woman’s head facing up. Paterae are thought to have been used in religious ceremonies, for pouring libations onto an altar. Their handles often ended in a ram’s or, less commonly, wolf’s head, so this type with a face is unusual. There is an identical handle from Rocester in Staffordshire and another from the Netherlands; the face is thought to be a Bacchic Medusa. This type of patera was probably made in Italy.

Curiously, there were no ceramics in the grave other than a few small sherds. These seem to have come originally from an infilled ditch that the grave had cut across and were more than a century older than the grave contents. Much of the grave pit, which measured 1.9 by 1.6 m appeared “empty”. This suggests that there were organic objects in this part of the grave that have since decayed.

Because one of the jugs had inlaid silver eyes and there was a silver coin, the items were declared Treasure and valued at the British Museum. North Hertfordshire Museum was successful in applying for nearly £60,000 of grant funding from The Art Fund, V&A Arts Council Purchase Fund, The Headley Trust and the Hertfordshire Heritage Fund. There was also a gift of £1000 from a private donor.

So who was the person buried here? Had they lived nearby? Is the burial part of a much larger cemetery? These are the sorts of questions that archaeologists will want to try to answer that go beyond the sorts of information we can get from using a metal detector. The person buried in this unusual grave—whoever they were—was wealthy, cosmopolitan and a member of a family that wanted to make a mark. After 1800 years, the contents of their grave still impress us with their workmanship (even if the mosaic dishes are not to 21st-century tastes). Thanks to the cooperation between metal detectorists, field archaeologists, finds liaison officers and geophysicists, we can find out so much more about the community to which they belonged than we would have done if the initial find had gone unreported. This must count as a real success story for the Portable Antiquities Scheme.

One Response to Museum news: a Roman treasure from North Hertfordshire