Man-traps first came into use in England during the late eighteenth century. The law permitting the use of man traps can be explained by the fact it was near impossible to protect game without some kind of aid. The use of man-traps and spring-guns was not completely inhumane as land owners were obliged to give notice (Fig I) that there were traps set in order to prevent poaching; unfortunately this did not always deter poachers. (See Fig II for our example of an inhumane man-trap, I am 5’3 and the trap is nearly as tall as me, so it is awful to imagine someone being trapped in this trap!).

Fig I A notice of man-traps

On occasion the land owner and staff were the victims of such traps and so the law was eventually altered in May 1827 which made it illegal to set man-traps, spring-guns and other mechanical items which would kill or maim except within a home between sunset and sunrise. It was in this period that the ‘humane’ man-trap (Fig III) came into creation which did not have teeth and was intended to harmlessly trap the poacher who would remain until a home-owner or gamekeeper came to release them with the key. 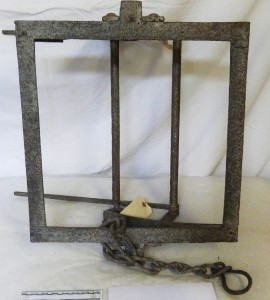 We also have some examples of spring-guns (Fig IV) which were more widely used as they covered a larger area, again there are two types; one potentially deadly and one humane. They worked by having a series of wires stretched at right angles which were attached to the gun, and so when the unfortunate person came across them and knocked one of the wires the gun would spin around to the wire which is now slack and would fire. The humane version did not contain live bullets, although they would still have the potential to injure! 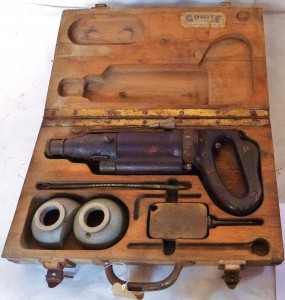