Over the Easter weekend, I visited the Cotswolds to enjoy a break in the English countryside. It was rather chillier than might be expected at this time of year, but the surroundings did not disappoint. One of the  particular attractions of the Cotswolds is that there are many villages and churches where the work of Arts & Crafts Movement designers can be seen, and one of these artists was of particular interest. 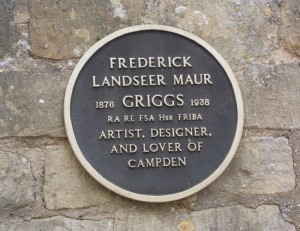 Although this plaque is found in the main street of Chipping Campden, where the artist spent over 30 years of his life, Griggs was born on 30 October 1876 in Hitchin and concentrated on his hometown and surroundings in his early work. 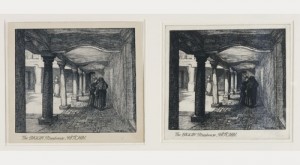 The Biggin Almshouse by F L Griggs, circa 1898, original drawings for the Hertfordshire edition of Highways and Byways.

Griggs settled in Chipping Campden in 1903 in Dover House, where the Guild of Handicrafts had already been established by C.R. Ashbee. He went on to design an Arts and Crafts house at ‘New Dover’s House’ and set up the Dover’s House Press there, where he printed late proofs of the etchings of Samuel Palmer and his own work.

He had converted to Catholicism in 1912, and it is thought that this is when he adopted the name Maur as a baptismal name, after the Benedictine St Maur. At around this time he also took up etching with passion, becoming a leader in the British etching revival. He was inspired by the work of Samuel Palmer and William Blake, and liked to use his etchings to capture an ideal of unspoilt England. He died 7 June 1938. A centenary exhibition of his work was held at Hitchin Museum in 1976. 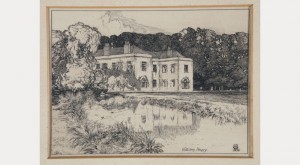 We hope that we will be able to display some of the drawings, etchings and photographs by F L Griggs at the new museum so that his work can be appreciated and enjoyed by a new audience.