Our current work to prepare for the new museum extends beyond choosing objects from our stores. Sometimes, we are able to add objects to our collection that will enable us to tell the stories of North Hertfordshire. You may remember that earlier this year we acquired a painting by William Ratcliffe of Ickleford, and we have already been able to use this painting as the focus of some work with the Ickleford community.  The latest addition to our collection is a watercolour painting by Francis King called “Garden City Revels”. 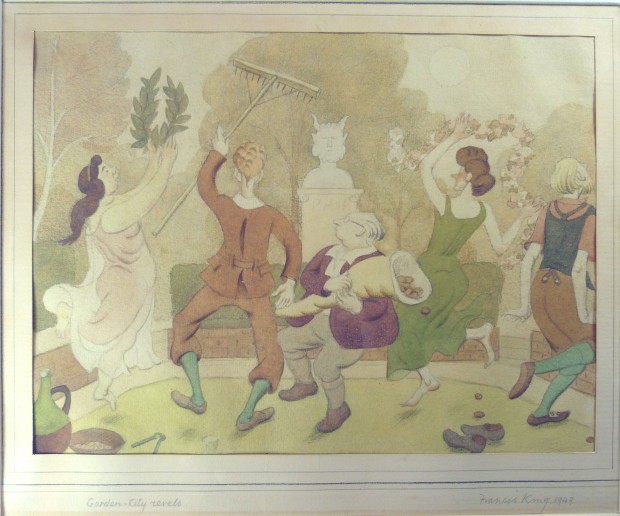 From left to right: Eleanor Harris; Harry Meyer ; a Letchworth Intellectual from a learned Society; Doris Meyer; the Arts and Crafts Devotee.

Francis King was trained in art at the Slade School in London between 1922 and 1924, and he was a contemporary of Anthony Gross, Rex Whistler and Stanley Spencer. In 1930 he became an art teacher, and in 1935 moved to Letchworth to teach at St Christopher School, where he remained until his retirement in 1970. He lived with his family first in Letchworth, then in Weston and finally in Ashwell, where he lived with his wife until his death in 2001 at the age of 96. He had two exhibitions of his work at Letchworth Museum, one in 1971, which was mainly of his cartoons, and one in 2005, which showed both his cartoons and his paintings.
We have a small number of his artworks in the museum collection showing local scenes, but this new painting is of particular interest to us for its illustration of life in the early Garden City and more particularly for its depiction of two people instrumental in setting up Letchworth Museum.
Francis King wrote of this painting:

“The early Letchworthians of the First Garden City were a by-word for alighting at Kings Cross station in anything from a toga to a farm labourer’s smock and sandals, clutching a shepherd’s crook. It was all part of the simple life movement. In my days at St Christopher School, I would walk along the quiet roads leading to Leys Avenue, to see notice boards in private gardens drawing attention to a Society promoting some obscure belief or other.
In my picture I tried to gather a representative collection of these by some individual characters known to me: for instance (reading from left to right): Eleanor Harris, co-Head of St Christopher School – a Theosophist and ardent vegetarian; our next door neighbour Harry Meyer – ‘Back to Nature’ – who could be seen first thing in the morning leaping in the air for joy with arms outstretched to greet ‘Glad Day’; next a Letchworth Intellectual from a learned Society; then Meyer’s Sister a keen botanist and illustrator by watercolour drawings; and finally on the right – the Arts and Crafts Devotee.
All are displayed in Bacchic dance in a little Public Garden (on the way to the centre) in which stood a lead grey statue of the lesbian poetess Sappho in a sad dejected posture, and so, clearly, un-united with my festive scene (strictly ‘tee-total’).”

Harry Meyer and his sister Doris were members of the Letchworth Naturalists involved in founding Letchworth Museum. Many objects in our collection came from the Meyer family, and we have several boxes of their archives in our Museum Resource Centre which we hope can be used as part of a research project in the future. Harry was also fascinated by windmills, and there is an extensive archive of his (20 albums of windmill photos from 1926 onwards, neatly arranged and listed by county) at the Mills Archive Trust in Reading. An exhibition of Harry and Doris’s photographs and drawing was held at Letchworth Museum in 2002.

This painting by Francis King delightfully captures something of the character of Harry and Doris Meyer and their surroundings, so that rather than remaining remote historic figures in the history of North Hertfordshire, we can glimpse something of their spirit. Through objects like these, we can really bring the past to life!

One Response to Garden City Revels