Published Friday 22 May 2020 | By Keith Fitzpatrick-Matthews 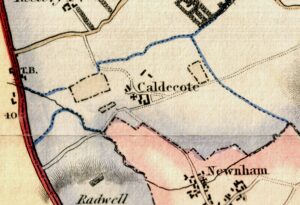 Caldecote as shown on Andrew Bryant’s map of Hertfordshire, published in 1822

The parish of Caldecote, five km north of Baldock, is one of the smallest in Hertfordshire, covering only 131.5 hectares (325 acres). It was first recorded in Domesday Book, compiled in 1086, but archaeological excavations have shown that its origins go much farther back. Today, it is an isolated community, away from main roads. In the Middle Ages, it was a single manor, which is described in detail in a survey written on 16 February 1321.

The village lay beside an ancient road linking Stotfold with Ashwell. Both were places of greater importance in the Middle Ages than they are today. Its main street was visible under pasture to the north of the church until a significant excavation in the 1970s and later ploughing.

The village today has only six cottages, a manor house and the redundant village church in the historic village centre, with two more homes on the A1 south of Farrowby Farm. Its population in 2011 was 17 residents. The village is difficult to visit as it lies away from main roads and can be reached only by a single track lane.

Guy Beresford carried out extensive excavations between 1973 and 1977 at Caldecote, focusing on the earthworks north of the church before they were levelled and ploughed. The work was undertaken on behalf of the Department of the Environment and the Deserted Medieval Villages Research Group. It was one of the most extensive excavations ever carried out on a later medieval rural site in Britain. Beresford examined five crofts, the former rectory and most of the moated site.
The excavation at Caldecote is still one of the most important ever carried out on a medieval village site, deserted or otherwise. It has much to tell us about life in the Middle Ages and the origins of English farming communities in North Hertfordshire and more widely.

Read more about the village here.