The sun has descended past the rooftops and there is a definite coolness to the air. Hot chocolate in hand, I park myself on a garden chair outside and eagerly await the show. Sure enough, it is not long before I can see them. Tiny black forms flit across the sky above my head, darting back and forth with determination. One drops down low, skimming the top of the fence before careening upwards, adeptly avoiding the side of the house, before looping back round to show off these acrobatics once again. My evening entertainment is being provided by a pair of bats. Oblivious insects rise into the air only to be snapped up moments later by a pair of tiny jaws. Sadly, it is not too long before my mug has run dry and the sun has all but disappeared. Hopefully there will be an encore tomorrow.

A year in the life of a bat is a fine balancing act of regulating energy expenditure and catching enough food to support this strategy. The year starts with hibernation; the cold days of January are spent in a state of torpor where the bats have a reduced metabolic rate. This means that the internal processes of the bat are so reduced that the bat expends barely any energy and appears to be in an extremely deep sleep. As the outside temperature starts to rise the bats can wake from this torpor for short periods to go and hunt before returning to this state as the temperature drops again. Fortunately, even with this periodic re-warming and energetic parts of the day, the bats still use less overall energy than if they had spent the winter awake and still catching food. 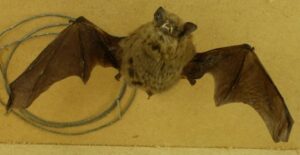 Come April, the weather is warm enough to allow the bats to come out of hibernation and start re-feeding, hibernating for long periods is hungry work. May is when things really start to heat up. This is when, on warm evenings, you may be able to see them flitting around treetops and over water sources as dusk starts to fall. Water sources and treetops are common hunting locations for bats as this is where there are likely to find their prey, insects. As insect nymphs mature and start to emerge out of their watery homes, bats will come skimming across the water surface and snatch them up before they have chance to move out into the wider world. Similarly, moths will try and hide in foliage at the tops of trees and so bats use their powerful echolocation skills to spy those sneaky creatures before they can make it to safety. Echolocation is technique used by bats to ‘see’ their prey in the dark. The call out in a series of chirps and whistle and use their large ears to listen for the sounds bouncing back off solid surfaces. Once they have registered the sound of a flying insect, they increase the rate of these calls to get increasingly accurate information on the precise location of the insect as they home in and ready themselves for their strike. When bats hunt on the wing this is called ‘aerial hawking’ whereas when capturing stationary prey, this is known as ‘gleaning’. Different species use different techniques; Pipistrelles catch and eat on the wing, but Brown Long-eared bats land and eat their snack whilst on a stable perch.

After a couple of months re-feeding, females seek out new roost sites and form maternity colonies. June comes around and the females ensconce themselves in their nursery sites, where they give birth. Typically, they will have a single pup, but in rare occasions twins can be born. As mammals, bats produce milk and the tiny new-borns cuddle into their mothers, clinging on with great determination whilst they suckle. It is not long, sometimes even around 3 weeks, before the young are testing out their wings and getting ready to fly under their own steam. By August, most young bats are ready to leave their mothers and can go out and catch insects for themselves.

Late summer arrives and the females and males are ready to move into mating colonies. Male bats use special calls, different to the ones they use for echolocation, in an attempt to attract females. It is important that they show off just how suitable as a mate they are. It is at this time that the bats are also aiming to build up their fat stores ready for the upcoming winter and hibernation. Pipistrelles can eat up to 3,000 gnats in a single night, an amazing feat considering they can comfortably fit inside a matchbox and weigh less than a sheet of A4 paper.

And so, the nights are drawing in, the days are getting colder and so the bats once again return to a state of torpor. These periods of sleep get longer and longer as we move into winter with most bats disappearing from our gardens once again in November.

Getting to know which bat species are in your garden can be a fun way to spend a warm evening. There are twelve bat species that a reported to be found in North Hertfordshire (see Table). The most common bats species seen in North Hertfordshire are the Common and Soprano Pipistrelle. Pipistrelles can be identified by their rapid darting flight, and frequent presence in our back gardens. However, to get a definite idea of the species, a bat detector is a vital piece of equipment. These machines record the sound frequency that is being produced by the bats as they echolocate. Armed with one of these and a good key you can put a name to the night time visitors swooping about in the trees. 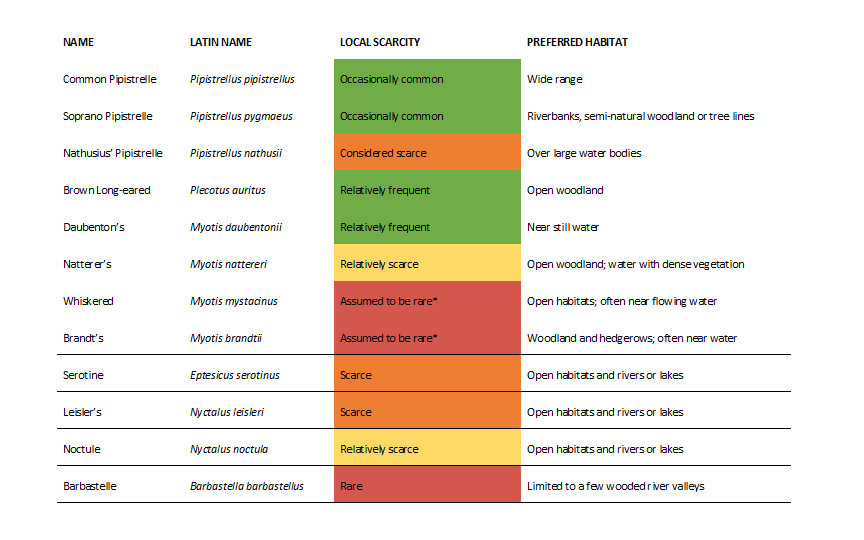 Table: a list of the bat species found in North Hertfordshire. Displayed with a scale of most common (green) to scarcest (red). * = not enough data on species to give specific comment on local scarcity.

It is important to note that bats are best viewed from a distance. All bats are protected by law in the UK and throughout most of Europe, so if you do find one in distress on the ground then it is important to not approach them but to seek advice from the Bat Conservation Trust. Alternatively, there are many local bat charities that are also ready and willing to give advice on any bat queries you may have. These are also many excellent places to go if you fancy doing a late evening bat walk or find other bat related activities. But most importantly, don’t be afraid! These tiny creatures are fascinating in how they move and survive, and it is a marvel to sit back and watch their aerial acrobatics as the sun goes down.

The year is 1812, and it is spring. Green, rolling hills are awakening with new life as the sun starts to warm, and the chill winds soften. Then there they would be, Great Bustards taking part in a mating lek. Proceedings would be heralded by a great sneeze, then a rasping, guttural croak. The proud males, moustaches fluffed, and wings flared to reveal the bright white feathers, strut back and forth to catch the attention of an adoring female. Standing at around 3 feet tall, these large birds, normally rather shy, would delight in the presence of spring and fill the air with their strange, croaking love song. Those passing the pastures of North Hertfordshire would possibly not have realised that these bizarre birds would, unfortunately, all too soon be gone from the countryside for the foreseeable future. 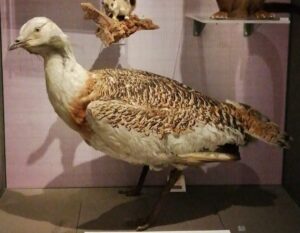 The Great Bustard (Otis tarda) is believed to have been present in the UK from the early Holocene, around 11700 years ago. Several species make up the Otididae family, with the Great Bustard being the largest. In fact, it is the largest flying land bird and the worlds’ heaviest flying bird with males weighing up to 18kg. This weight means that these are not the quickest of birds. The name given to it by Pliny the Elder, avis tarda, means ‘slow bird’. However, this slowness does not mean that it is easy prey. They were known for being particularly wary of hunters, dispersing at the slightest sound, using their camouflaged feathers to hide them in the undergrowth. Suffolk fowlers created specialised ‘cribs’, small camouflaged hides on wheels pulled across fields via a pulley system. Concealed within, the fowlers would slowly approach flying birds, catching them unawares as they struck (Cocker and Mabey, Birds Britannica, 2005).

Reported to taste like a cross between a goose and a turkey, these huge birds were highly sought after for the dinner table. Whilst they were indeed difficult to catch, a period of intensive land enclosure in the 1840s meant that these large birds were facing a great reduction of the standard open spaces they require (Cocker and Mabey, Birds Britannica, 2005). As droves, the collective noun for Great Bustards, were placed under ever increasing agricultural pressures, these hunting efforts started to have a greater negative impact on their population numbers. Unfortunately, the Victorian passion for collecting acted as the final nail in the coffin. With its’ increasing scarcity, the price of eggs and skins rose, leading to an increased demand. There are various reports of the final bird in the UK but one of these last few was shot at Therfield Heath by 1832.

There have been various attempts to reintroduce these birds to the UK. The first attempt took place in Norfolk in 1900, followed by another in Porton Down, Wiltshire in the 1970s (Cocker and Mabey, Birds Britannica, 2005). Whilst both initial attempts failed, they did pave the way for the most recent introduction starting in 2004. Undertaken by the Great Bustard Group, with initial funding help from the RSPB, this project has been successful in re-establishing the Great Bustard in the UK on Salisbury Plain. Until 2013 the birds were sourced from the Russian Federation; eggs were taken from doomed nests and then incubated in an artificial system before being brought to the UK for release. However, in 2013 a decision was made to change the source population to eggs reared from Spanish stock. These eggs were sourced directly from successful nests, although early in the season to promote the production of a second clutch and further in situ populations. In order to prevent imprinting and keep natural human phobia in the chicks, they are fed by hand puppets designed to look like an adult Bustard and the rearing team also wear dehumanising suits prior to release. In 2014, 33 birds were released, and this stock showed a 50% survival rate over the first season, greater than both the previous Russian individuals and the expected survivability of a natural population. The UK population now stands at around 100 birds maintaining a self-sustaining population in Wiltshire.

There is definite promise that we may one day be able to see wild populations of these fantastic birds. And maybe that strange call will be the new indicator that spring is here once again. 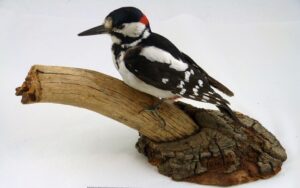 Roll up! Roll up! See the mysterious platypus and much more!

Did you know that our museum collections are home to 100,000 natural history specimens from all over the world? Fossils, skeletons and stuffed animals aplenty. These amazing things were brought together over hundreds of years. Join us for a talk by our Assistant Curator, who will be shining the light on some of the strange and lesser known specimens from our Natural History Collections.

Get your explorer hats on and see some curiosities up close!

Join our Assistant Curator, Matt Platt for this fascinating talk.

Buy your tickets online or from the Reception Desk.