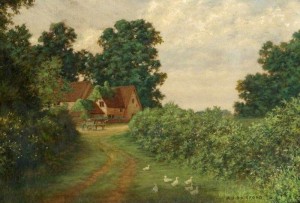 One of our many tasks while preparing for the new North Hertfordshire Museum is to understand the collections we hold and where they came from. This often helps to tell us more about the objects, and it is why, when people donate items, we collect as much information about the person giving the item as we do about the object itself.

The Bamford family were one of the families involved in setting up Letchworth Museum and providing items for the collection. We were in correspondence with current members of the family about some of these items shortly after Letchworth Museum closed, and this has led to helping them with an interesting Art Exhibition, The Artful Gene, currently at the Letchworth Arts Centre until the end of August.

This is an exhibition of paintings and drawings by A.J. Bamford (1849 to 1929)  and his great grandson M.J. Bamford (b. 1959) who lives in Australia. 100 years after the first exhibition of Alfred’s work this new exhibition explores the Bamford family tree and features sketches, drawings and more by both artists comparing the similarities in style and subject between the two artists, and exploring whether artistic talent and style exist in the genes.

Reverend Alfred J Bamford was born in Folkestone in 1849 and although he was interested in the study of animals and a talented artist and illustrator, he trained in Christian ministry. His first church was in Kent after which he served abroad for six years in India and China. He returned to England and became minister of a church in Lancashire for twenty years, but retired early, and moved to the new Garden City of Letchworth in 1907. 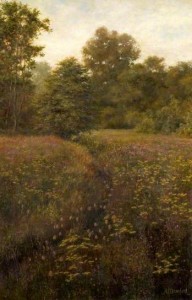 One of Letchworth’s earliest residents, he took an active role in many of the town’s organisations. He was a member of the Literary and Debating Society and became Chairman of the Naturalist Society in 1916 during the period when the Society ran Letchworth Museum. He was a member of the Brotherhood Church, he lived on Hillshott and was known locally for his art work. Some of his paintings were shown in an exhibition of local Arts and Crafts mounted for the newly extended museum in 1920. He died in September 1929. Seven of his paintings were donated to Letchworth Museum, and can be seen on the BBC Your Paintings website and copies of them form part of the current exhibition.

Do visit the exhibition, particularly as there are sketches on show of local scenes that the family have not been able to identify and they are hoping to make use of local knowledge to fill in the gaps. Look out too for the workshops run in connection with the exhibition over the coming weeks.

Revealing Hidden Landscapes and other things we do beyond the museums

You will have seen, if you follow our blog or have come on one of our tours, that many staff are busy at work behind the scenes making preparations for the new museum. This does not mean, however, that we have withdrawn from the wider world. The “Discovering Ickleford” Heritage Lottery Funded project has recently involved our Learning Officer Cas and Cultural Services Manager Ros working with the local community and schoolchildren there. David Hodges, one of our curators, is working with local football clubs to develop a travelling exhibition about the history of football in the area to go with some of the fantastic objects in the football collection. Our Archaeology Officer, Keith, is out on the annual dig with the Norton Community Archaeology Group exploring the site of a Bronze Age Henge. 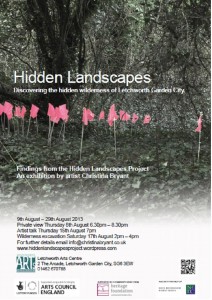 One of the other projects in which we have had some involvement is culminating in a exhibition which opens on 9th August. “Hidden Landscapes” presents the findings from the Hidden Landscapes Project, carried our by visual artist Christina Bryant. Christina spent 12 months exploring chosen sites located along the urban fringes of Letchworth Garden City. Her interest is in the spaces that straddle the urban and the country, the ‘wilderness’ that lies just beyond the codes and surveillance of the town. Her focus was on areas showing evidence of current or recent human occupation, recording, mapping and surveying the rubbish and debris from the selected locations. She met with me, as a museum curator, to talk about curation and display of objects, and worked closely with our archaeology officer Keith Fitzpatrick-Matthews in order to understand and use the painstaking methods of an archaeologist to help explore what links us with our everyday landscape.

Christina is keen to get local people involved with the project as much as possible. In addition to the exhibition, she is organising a ‘wilderness excavation’ at one of the sites on Saturday 17th August, 2-4pm, which anyone will be welcome to attend. This will give people a chance first hand to experience her project.