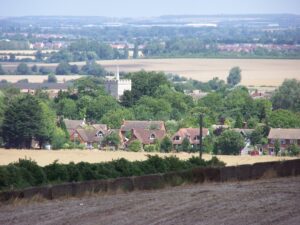 The village of Pirton, at the foot of the hills towards Highdown

Sometimes, the amount of information about a place can be overwhelming. After choosing to look at the village of Pirton, it soon became obvious that there is so much information that trying to do justice to it in a single blog post is impossible. Instead, we’ll look at its medieval history and its origins. Even then, there is too much to put into a single post, so what follows is just a summary. If you’re interested enough to want to know more, there’s a link at the end to a longer version.

Pirton in the Middle Ages (and before)

Like so many places in England, Pirton is first mentioned in Domesday Book, where it was called Peritone. Other medieval spellings show that the name contains the Old English words pirige, ‘a pear tree’, and tūn, ‘an enclosed dwelling or farm’. At the time of Domesday Book, which was compiled in 1086, the manor was held by Ralph de Limesy. It was a big place, with 25 villeins, a priest, 29 bordars, an English knight, a freeman and 12 cottars liable to pay tax (Domesday Book was compiled to help King William I work out how much tax he could extract from the population). A villein was an ordinary villager who farmed land in the community’s field; a bordar was another villager who had less land than a villein, while a cottar was someone who lived in a cottage, usually farming someone else’s land. This total of 68 individuals would give a population for Peritone of up to 425 people. Although this is small by modern standards, it was huge for 1086. The town of Hitchin, one of the largest places in Hertfordshire at that time, had a population of little more than 600 by the same calculations. 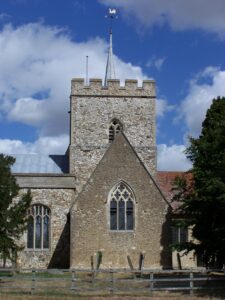 St Mary’s Church from the south

The history of the manor

The early county historians concentrated on giving the descent of the manor through various families: the then current lords of the manor were the writers’ target audience. All four pages of Sir Henry Chauncy’s 1700 Historical Antiquities of Hertfordshire that deal with Pirton are taken up with tracing the descent of the manors. The original manor eventually spilt into three separate parts, while a fourth part became Ickleford, which was not listed separately in Domesday Book. It remained a family possession throughout most of the Middle Ages. The descendants of the earliest Norman lord, Ralph de Limesy (or Limesi), held two of the three manors for up to twelve generations. William Clinton, who was the last descendant to hold the Manor of Lindesei, sold his part in the 1400s, while Edward Oddingsells, the last to hold the Manor of Doddinsells, sold his manor in 1513. Ralph had granted part of the manor to the Priory of Hertford, which he founded about 1087, which remained a church possession until the Priory was dissolved in 1534. It became known as Rectory Manor.

Something that confuses people is understanding exactly what a manor was. Although we can draw the boundaries of a parish on a map, it is much more difficult with a manor, because they were defined legally rather than geographically. In the Middle Ages, the king and the church owned all land, but other people could hold land from them for the payment of rent and services, which might include military service. Doddingsells Manor was held by the payment of a pair of gilt spurs and the sum of 2/6 (12½p), which the tenant handed over at the annual meeting held at Oughton Head, on the boundary with Hitchin. Gil Burleigh, an archaeologist living in Pirton, has suggested that the importance of Oughton Head began in remote prehistory, when it was a focus for religious activities, which continued through to the arrival of Christianity in the seventh century. The manorial meeting may well have been the medieval ‘descendant’ of these activities.

There is an earthwork castle, known as Toot Hill, in the centre of the village, south of the parish church. We do not know when it was built, although many historians believe that it dates the mid-twelfth century. This period, known as The Anarchy, was a civil war between King Stephen and Empress Matilda, fought 1139-53. In 1935, some schoolboys held an unofficial dig on the top of the motte and their headmaster kept the pottery they found. Most of it dated from the twelfth to fourteenth centuries. There were no sherds at all of Late Medieval Transitional Ware, which indicates that the site had been abandoned before 1400.

A reconstruction of the timber castle, drawn by Ann Walker of the Field Archaeology team in 1988

The Field Archaeology Section of North Hertfordshire Museum carried out a survey of the field east of the motte in 1988. The survey found that Toot Hill and the surrounding earthworks in The Bury were an unusual form of earthwork castle with two baileys. The larger of the two lay to the east and included the parish church, while the smaller bailey to the west may have been the site of the manor house. Beyond the smaller bailey, Great Green was once known as Chipping Green. The Old English word cēping (pronounced ‘cheeping’) meant ‘a market-place’, which seems to show that Pirton once had a market. This was a period when, despite the political anarchy, many lords were setting up new markets as a way of making money. 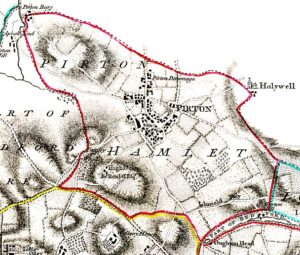 Pirton as shown on the map of Dury and Andrews, published in 1766; does this show the layout of the medieval village?

Pirton and the Black Death

The Black Death is currently a topical subject because of the global pandemic of CoViD-19 in 2020. The first record of the disease comes from Kyrgyzstan, where gravestones dating from 1338×9 mention that the people buried in these graves died from plague. From central Asia it spread east to China and west to Europe, reaching England in June 1348. It was spread partly by rat fleas carrying one form of the bacterium Yersinia pestis, but recent work suggests that, like CoViD-19, it also spread from person to person in water droplets in their breath or when they sneezed.

We know of the effects of the Black Death in Pirton thanks to the work of Carenza Lewis, who led the excavation of test pits in people’s gardens across the village from 2007 to 2011. The project aimed to discover how many datable finds were to be found in different parts of the village. The main concentration of finds dated before the Norman Conquest was in the area between Walnut Tree Farm, at the southern edge of the present village, and Hambridge Way, at the eastern end. Over the next 200 years, activity spread across the entire village, with new concentrations around Burge End, at the northern end of the village, and around Shillington Road. From the later 1300s on, the number of finds dropped dramatically, with many of the test pits that had contained large numbers of finds of the period 1050 to 1350 now containing none.

There are 68% fewer test pits containing pottery dating from the two centuries after the Black Death than there are from the two centuries before that. At face value, this would suggest that two-thirds of the village’s population died in the outbreaks of 1347×8 and 1361. Careful plotting of the findspots shows that the reduction was greatest in three zones: around Burge End Lane, around Royal Oak Lane and east of Walnut Tree Lane. These three areas seem to have lost their population completely. The village was now reduced to three main centres, around Rectory Farm, around Burge End and around Great Green. Any hope that the settlement might have grown into a market town would have to be abandoned.

Before Domesday and the castle 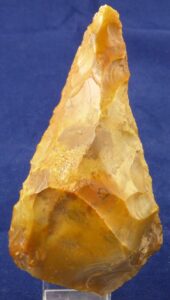 The oldest find from the village: a handaxe more then 70,000 years old

Most communities can boast the discovery of prehistoric finds and Pirton is no exception. The oldest find from the village is of a handaxe (not an axe, but a multi-purpose tool), dating back to between 130,000 and 70,000 years ago. When a site north-west of the village was investigated in 1990 during the construction of a oil pipeline, Late Neolithic Peterborough-type ware, dating from about 3100 to 2500 BC was found; this is the same sort of date as the burial mound at Knocking Knoll, close by on the county boundary to the southwest. More Peterborough-type ware was found during the trial trenching on The Fox site in 1993. There is a site just north of Oughton Head, known from cropmarks, that looks like a henge, a Late Neolithic religious site. 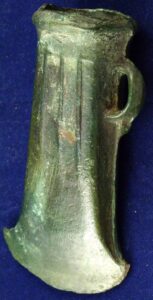 A Late Bronze Age socketed axehead from Pirton, dated 950-750 BC

Metal detectorists have also found prehistoric objects in the fields around the village, including a Middle Bronze Age shield pattern palstave, dated 1500-1350 BC. It was found in a part of Danes Field, west of the village, known as Cat’s Brains and is now on display in North Hertfordshire Museum. A palstave is a type of axehead with a ridge between the blade and the tang to stop the axehead from working up into the handle and splitting it. Later types were hollow, so that the handle would fit inside: there is one of this type from the village, dating from 950 to 750 BC.

These hints of activity from such remote periods have no connection with the development of Pirton as a village. People have come and gone in our landscape for thousands of years, without establishing settled communities. It was during the Iron Age, in the first millennium BC, that the pattern of our present landscape began to take shape. By the end of the Iron Age, in the first centuries BC and AD, a settlement was growing up at the north end of Danes Field. Part of it was excavated in 1990, showing that it continued to grow through the Roman period (AD 43 to 411) and into the fifth or even sixth century. The village extended north-eastwards along the stream past Burge End. At the same time, another community was developing around the sports club, east of Walnut Tree Road. 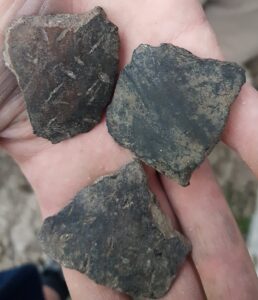 During the fifth century, these settlements shrank, although people continued to live in both. Instead, a new community revealed by excavations from 2015 to 2018 grew up at Priors Hill, south of Rectory Farm. There had been some activity here in the Iron Age, but it did not develop into a village like that in Danes Field. The community at Priors Hill flourished from the fifth to ninth centuries. A group of perhaps three or four rectangular enclosures, parts of which survive as earthworks, developed around this area, each of which seems to have been occupied by well-off families. The survival of these is very rare and the fact that there are at least three is even more unusual. 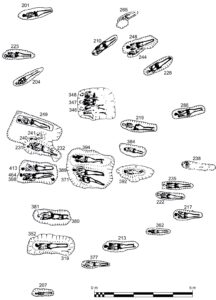 The 8th to 10th-century Christian cemetery at Coleman’s Close

Between AD 700 and 800, a new location was chosen for a cemetery, which was laid out in a fenced area to the south of a building that was probably a church. This was discovered in the 1990s, during the construction of Coleman’s Close, to the north of The Fox. Finds from the graves include part of a broken pottery bottle imported from France, an expensive and unusual object. Activity here continued almost to the time of the Norman Conquest, when it became part of one of the concentrations mentioned above.