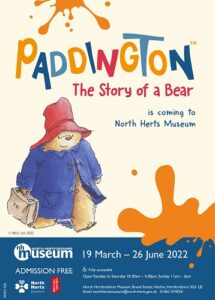 The brilliant touring exhibition from the British Library, Paddington: The Story of a Bear, is at North Herts Museum. Follow his trail of marmalade splats to explore his tales of adventures in this educational and fun exhibition.

Celebrate one of the world’s most beloved fictional characters over 60 years on from when he was first introduced in 1958. Featuring over 50 books, documents and original artworks, highlights include the first edition of A Bear Called Paddington by Michael Bond given to his parents, a selection of memorabilia owned by Michael Bond – including Bond’s typewriter used in the 1960s – and original illustrations of Paddington stories by artists including Peggy Fortnum, David McKee and R.W. Alley.

Join us for a marmalade sandwich-fuelled trip down memory lane – an average visit lasts 30 minutes.