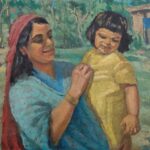 Sylvia Molloy was an adventurous and well-known artist from England, who graduated from Durham with a degree in Art and English. She began teaching in St Asaph and met her husband-to-be in Cambridge, joining him in Burma, where they were married. He was an Assistant District Officer, whose job took the newlyweds through the Shan States, where Sylvia made sketches and paintings of local people. When the Japanese invaded in 1942, she left for India on the last RAF flight from the country. Their first son was born during the year they spent in India and their second when they came to the UK. After the war, they returned to newly-independent Burma only to flee again when terrorists assassinated the entire cabinet. Catching a ship to Durban they settled in Johannesburg, where they remained for sixteen years. Disgusted with Apartheid, the couple left South Africa and came to Letchworth Garden City in 1963. For many years Head of Art at St Francis College, Letchworth, Sylvia exhibited at The Royal Academy, the Paris Salon, the Royal Australian Society of Arts as well as other galleries.

This exhibition is in the Exhibition Gallery